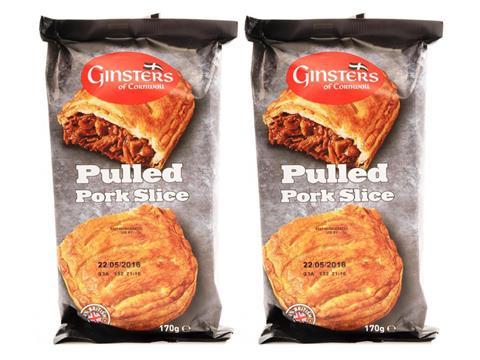 Why: Ginsters is the UK’s top savoury pastry brand. It sold an extra 3.2 million units last year, keeping its value sales static at £103.6m [Nielsen 52 w/e 30 December 2017], as shoppers eschewed healthy snacking in favour of convenience and innovation. New lines included a BBQ Pulled Pork Roll, following the earlier launch of this similarly filled slice. Containing 292kcal per 100g, it rolled out originally as a limited edition but was later brought into the core Ginsters range as the Cornish brand targeted carnivores by adding extra meat and filling to its slices.

Consumer verdict: The Ginsters logo and ‘100% British pork’ stamp sparked interest among our shoppers but sampling led to disappointment, with scores below the norm for health, taste, texture and value for money. In spite of complaints such as “wouldn’t know it was pork”, some testers were positive. They enjoyed the slice for its “light, crisp” pastry and “moist” filling, and said it would be a “good standby” option for a midweek meal. However, the snack scored slightly below the category norm.