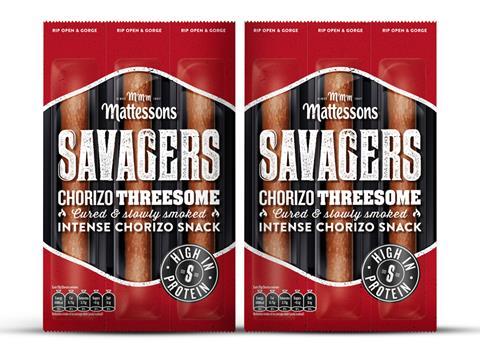 Why: Meat snacks were added to the ONS ‘shopping basket’ for the first time in March, placing the protein trend firmly in the mainstream. The Savagers range was launched by Mattessons to tap the popularity of a category that has seen sales grow by almost £11.1m to £128.7m [Nielsen 52 w/e 27 October 2015]. This product for adults, with its fashionable chorizo flavour, also falls into the booming Continental meats category.

Consumer verdict: The individually wrapped sausages were considered good value for money and were easily split to add to lunchboxes. The chorizo was “smoky” and “peppery” with a “kick”, but not too spicy to alienate children. More than one third of testers considered the product to be suitable “for kids”. It also had a “meaty” consistency, although some felt it was too “chewy” and “rubbery”. Respondents inevitably compared the product with its closest rival, Peperami, and ­opinion was divided as to which was better.