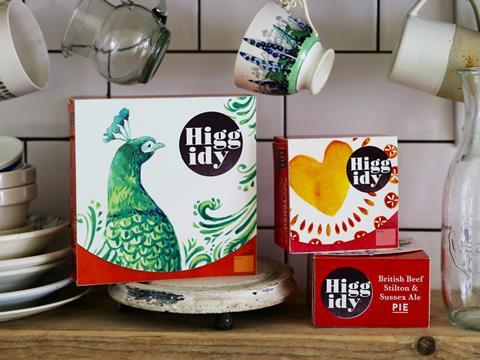 Premium pie maker Higgidy has fallen to a pre-tax loss as investment into its brand and new products hit its bottom line.

However, the escalating cost of ingredients as well as investment into its brand and West Sussex manufacturing base meant it recorded a pre-tax loss of £180k from a profit of £817k in the previous year.

The year saw “heavy investment” in product innovation, according to MD Mark Campbell, including the launch of meat-free products.

It invested £386k in its Shoreham-by-Sea factory to expand capacity and manufacturing capabilities and the company incurred a one-off cost of £177k related to brand investment.

Campbell added that the “continued high ingredients costs and the lag of passing these on to our customers” had also hit first-half revenues, though price increases pushed through later in the year should lead to improved profitability in the current financial year, he said.

Higgidy posted its first annual profit in three years in its 2017 financial year, though this was primarily driven by a change in its accounting treatment of leasehold depreciation, which added almost £1.5m to its bottom line.

On an underlying basis performance improved in 2018 given its previous year was hit by a dip in sales as its rebranded range regained customer recognition and a sharp increase in input prices.

Higgidy returned to top-line growth last year despite losing all nine of its Tesco listings in mid-May 2018 amid a rationalisation of the retailer’s savoury pies.

The brand shook off the delisting to become the second largest savoury pastry brand during the year, with a market share of 8.3% in the branded pie, quiche and sausage roll category.

“Despite a very competitive retail environment, current performance shows that Higgidy is expected to continue to grow healthily in the coming year,” Campbell said.

“The investment over the last couple of years in the brand and innovation is paying dividends in the ability of the brand to stretch into areas.”