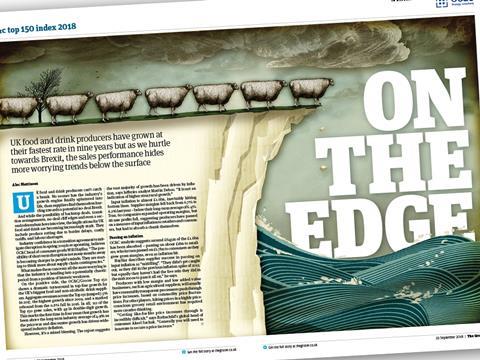 UK food and drink suppliers have surged to their highest growth levels since 2009, but profit margins are suffering amid escalating input and labour costs.

However, while the slump in the pound and resultant food price inflation helped drive growth, the inflationary environment saw margins fall from 6.7% to 6.2%.

“The first anticipatory impacts of Brexit have already had a major impact on producers, with inflation triggered by sterling devaluation boosting top-line growth but compressing margins as producers struggled to pass on all the raw material inflation they suffered,” said OC&C head of consumer Will Hayllar.

OC&C analysis shows mounting input inflation led to around £1.6bn of extra costs for UK producers. The industry passed on about two-thirds of this through price increases, but had to absorb a collective hit of around £645m.

The supermarkets managed to inflate gross margins despite facing more than £1bn of supplier price increases. Retailers passed on around £1.7bn of extra costs to consumers as they recovered some margin, partly to mitigate rising staff costs.

The report showed a 6% rise in cost per employee last year – as a reduced supply of EU labour and the increasing minimum wage intensified pressure on costs.

“The industry needs to invest to drive productivity but has only seen a very slight increase in capex t help counter this,” Hayllar added.

Applegreen, which also has a major presence in the UK and United States announced plans for the takeover in August.

The company announced this morning that it has conditionally raised €175 million (c.£156 million) before expenses through the proposed issue of 28,782,895 New Ordinary Shares (the “Placing Shares”) at the Placing Price of €6.08 (543 pence) per Placing Share.

Goodbody Stockbrokers and Shore Capital are acting as joint bookrunners to the placing.

Dealings in the Placing Shares on AIM and ESM are expected to commence on 25 October 2018.

The deal is subject to shareholder approval and Applegreen has convened an extraordinary general meeting on 24 October.

“We are delighted with the very strong support and encouragement received from existing shareholders and from new investors for the Welcome Break transaction and related placing,” said Applegreen CEO Bob Etchingham.

“This acquisition is transformational for our company in the strategically important UK market and we look forward to completion at the end of October. Building a wide and high quality investor base in parallel with expanding our business across chosen markets are core objectives and this transaction and associated equity raise significantly advances that strategy.”