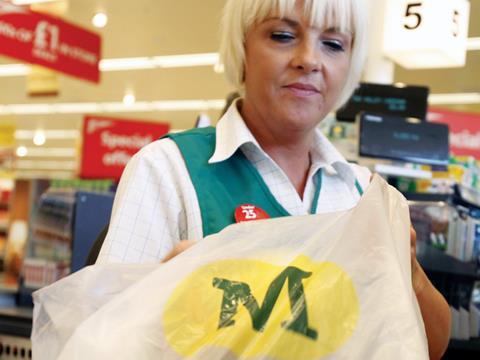 Morrisons’ (MRW) like-for-like sales rose 3.4% in the 13 weeks to 30 April – its sixth consecutive quarter of like-for-like growth and highest growth rate yet under CEO David Potts.

Group like-for-like sales excluding fuel were up 3.4%, driven by a 3% contribution from retail of 3% and a wholesale contribution of 0.4%.

It added there imported food prices were affected by lower sterling causing some inflation during the period.

It stated: “Irrespective of these external pressures, we remain focussed on the journey towards a Morrisons price list and becoming more competitive for customers, and we introduced another wave of ‘Price Crunch’ lower prices just this week.”

CEO David Potts said: “Our new financial year has started well, thanks once again to the dedication of our team of food makers and shopkeepers. We are improving the shopping trip in many different ways, which is making Morrisons more popular and accessible for customers. These new initiatives in-store, online, in wholesale and services are beginning to build a broader, stronger Morrisons.

“We are confident we will continue to turnaround and grow Morrisons. Our expectations and guidance for 2017/18 are unchanged, including year-end net debt of less than £1bn.”

Kerry said it has achieved a “solid start to the year”, maintaining the positive business momentum reported in Q4 2016.

Despite the uncertainty following the UK electorate decision to leave the European Union, Kerry Foods continued to perform well delivering sustained volume growth. However the division’s trading margin was impacted by the currency transaction impact of the sterling devaluation.

Its consumer foods division, Kerry Foods, delivered 2.3% business volume growth relative to Q1 2016 and pricing increased by 1% on average across the first quarter.

The divisional trading profit margin decreased by 70 basis points as the underlying margin improvement was more than offset by transaction currency headwinds.

Kerry Group CEO Stan McCarthy said; “Our first quarter highlights a good volume driven performance across Group businesses, maintaining the momentum reported in 2016. The Group expects to achieve good revenue growth and 5% to 9% growth in adjusted earnings per share in 2017, as previously guided.”

Also this morning, Carlsberg has issued a trading statement for the first three months of the year.

The Danish brewing group said organic net revenues were up 4% during the period, with reported growth of 5% to DKK13.7bn (£1.6bn).

The revenue increase was driven by a 4% improvement in price/mix with total volumes flat organically.

Carlsberg said growth was driven by international premium brands, with Tuborg up 1%, Carlsberg 8% and Grimbergen up 25%.

For the full-year 2017 it expects mid-single-digit percentage growth in organic operating profit, a reduction in financial leverage and a positive currency impact of around DKK 300m now expected (down from the previously forecast figure of DKK350m-plus).

Commenting on the results, CEO Cees ’t Hart said: “With 4% organic net revenue growth, we delivered a solid start to 2017, in the seasonally small first quarter. The execution of Funding the Journey is progressing well and we’re on track to deliver on our 2017 commitments. We’re maintaining our full-year outlook.”

The FTSE dipped 0.2% to 7,234.5pts but it was a far tougher day for the listed supermarkets as Sainsbury’s led a sector-wide plunge.

Sainsbury’s (SBRY) was the FTSE 100’s biggest faller yesterday, plunging 5.7% to 263.5p after posting its third consecutive year of falling profits and cutting its annual dividend. Sainsbury’s profits were slightly below expectations as the positive contrition of Argos was unable to fully mitigate contracting margins in its core grocery business.

Sainsbury’s full-year results coincided with what were on the surface encouraging grocery market share figures from Nieslen and Kantar Worldpanel, with Kantar finding the highest level of UK grocery growth since 2013.

However, Tesco (TSCO) dropped 3.4% to 176.8p and Morrisons fell 1.4% as the market share data and Sainsbury’s results exacerbated fears that the current wave of grocery inflation was playing back into the hands of the German discounters.

Ocado (OCDO) largely consolidated Tuesday’s gains on the back of rumours of a delivery tie-up with M&S, falling just 0.9% to 263.1p.

Imperial Brands dropped 1.6% to 3,701.5p after reported a slump in first half tobacco volumes yesterday.