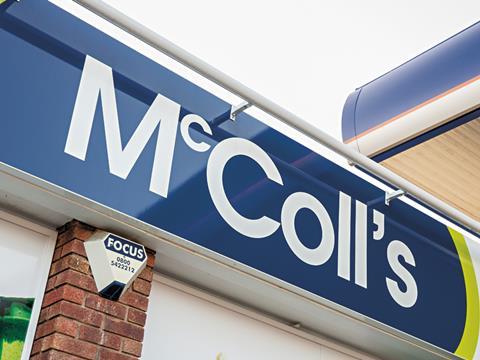 Newsagent and convenience group McColl’s (MCLS) has reported a 2.2% rise in sales for the 26 weeks to 29 May, but like for like sales fell 2.2%.

Recently acquired and converted stores saw like for like growth of 1%. However, like for like sales were down in its premium convenience and food and wine stores by 1.5% and in newsagents by 3.7% as a result of “continued pressure on traditional categories”.

It said its investment in food-to-go offer continues to deliver strong sales with like for like sales in the category up by 11.4%.

Operating profit before exceptional items was flat at £9.6m, while pre-tax profits were up 8.1% to £8.2m. Adjusted EBITDA was marginally down to £16m from £16.2m last year.

After year-end McColls completed the “transformational” acquisition of 298 convenience stores from The Co-operative Group announced 13 July 2016, with the transition likely to commence from January 2017.

Chief executive Jonathan Miller said: “I am pleased to report marked strategic progress and a robust financial performance in what has been another challenging period for the sector.

“We are committed to enhancing our convenience proposition through growing market share, developing our product ranges and delivering great customer service. I am especially pleased that we have been successful in the transformational acquisition of 298 Co-operative stores, announced on 13 July 2016. This is a pivotal moment for the business and allows us to accelerate our growth ambitions and considerably increase our neighbourhood presence.

We are confident that our position as a leading neighbourhood retailer will allow us to deliver sustainable returns for shareholders. The business is well placed to make further progress in the second half and we remain on track to achieve results in line with the Board’s expectations for the financial year.”

McColl’s shares are unchanged at 148p this morning.

Pub and brewing firm Marston’s has issued a trading update for the 42 weeks to 23 July.

It said trading was in line with expectations, with its destination and premium venue sales up 2.5% like for like including like for like food sales growth of 2.1% In taverns, like-for-like sales for the 42 week period were 2.8% ahead of last year, with Euro 2016 has contributed to this continuing strong performance helping to offset mixed weather.

In brewing, its own-brewed beer volumes were up around 14% compared to last year.

CEO Ralph Findlay said: ““We continue to be encouraged by our performance… In brewing, we are growing in an attractive market, demonstrating the effectiveness of our new product development and the appeal of our brand portfolio, underpinned by industry-leading service.

“Although much has been written about the potential effect of Brexit on consumer confidence, we have not seen any discernible impact on trading to date. We believe that our focus on value and affordable treats is appropriate for current market conditions, and while we remain ever mindful of the risks to long term business confidence, it continues to be our intention to develop and implement our proven growth strategy.”

Late today in the US there will be second quarter trading updates from Mondelez (MDLZ), tobacco giant Altria (MO) and Coca-Cola (KO) and Whole Foods Market (WFM) has a Q3 update.

The FTSE 100 edged up 0.2% to 6,724pts as the new-found market stability continued yesterday, but it was a tough day for the listed supermarkets.

Ocado was also caught up in the negative sentiment around food retail – despite being more resistant to the bad weather which had hit the sector’s trading, according to Nielsen. Ocado was 1.4% down to 269.2p yesterday.

Another significant faller yesterday was Greencore (GNK), which dropped 3.3% to 310.8p despite reporting a 4% sales uplift in the 13 weeks to 24 June, with Brexit having only a “modest” impact on its trading.