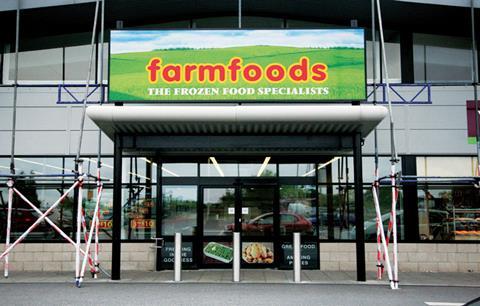 Pre-tax profits at frozen foods supermarket Farmfoods more have halved in 2016 as the retailer lost £25m of sales amid fierce sector competition.

Newly filed accounts for the year to 31 December 2016 show Farmfoods’ pre-tax profits fell by 54% to £9.2m from over £20m in the previous financial year.

The fall in profitability was exacerbated by £2.1m gain on asset disposals in the previous financial year, but gross profit was still down by 46% during the year.

The 300-plus store retailer noted that “trading conditions have been and are expected to remain competitive”.

The 3.6% sales drop was an improvement since the 14.4% plunge in sales in 2015 as the intense competition in UK grocery hit trading.

The frozen discounter, which retains a 0.6% share of the total UK grocery market, has clawed back its sale decline to just 1.4% in the most recent three month market share data, which represents its best sales figures since November 2016.

Farmfoods had grown its sales by 17.8% during 2014 as the thriving discount market helped it double-digit growth.