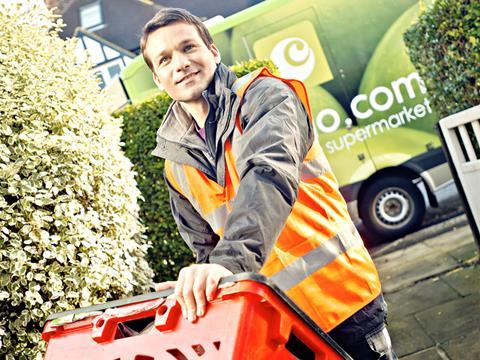 Ocado (OCDO) has posted its second consecutive annual profit after a year which saw retail sales rise by 14.7%, but the online grocer is yet to sign any crucial international partnerships.

Ocado’s preliminary results for the 52 weeks to 29 November saw a pre-tax profit of £11.9m – a 65.3% increase on last year’s figure of £7.2m which was the company’s first ever annual profit.

Chief executive Tim Steiner said the results “illustrate the progress Ocado has made through its clear focus on innovation and customer service”.

“The continued enhancement of Ocado’s industry-leading technology and investment into our retail proposition over the course of the year has meant our customers now have greater choice, competitive prices and consistently high order accuracy and on-time delivery. As a result, customer numbers grew, reflected in strong revenue growth in a very challenging market environment.”

However, average basket value declined by 2.1% to £109.95 as price deflation in the market and the increased mix of standalone orders for Fetch and Sizzle hit order values.

Ocado own-label sales were up by 16.8%, while sales from Morrisons.com are “progressing well” and reached around £200m after 12 months of trading.

Ocado had bullishly predicted it would sign its first international distribution agreement by the end of 2015, but missed this self-imposed deadline and is still yet to solidify any non-UK partnerships.

The retailer said today: “Despite not signing a first deal in 2015, discussions with multiple potential international partners to adopt the Ocado Smart Platform solution continue and our confidence in signing a deal remains high.”

Steiner said he expects “to sign multiple deals in multiple territories in the medium term”.

“”We are transforming the shopping experience for the benefit of our customers in the UK, and expect to do so for customers in other countries through Ocado Smart Platform. We look forward to making further progress over the current financial year.”

Ocado said it expects to continue to grow ahead of the online market and predicts capital expenditure in 2016 will be approximately £150m. The capital expenditure requirements for any Ocado Smart Platform deals signed are not expected to be significant in 2016, it added.

EBITDA for the year was up 13.8% to £81.5m, with underlying EBITDA up 16.1% to £75.8m including the impact of the Morrisons JV and share based management incentive charges.

Analysts at Goldman Sachs said: “Underlying EBIT margin expansion at Ocado.com, despite the gross margin pressures in the UK grocery sector, alongside strong sales growth, underlines the quality of the core business.

“We still believe the Ocado Smart Platform is a compelling solution for grocers looking to move online.”