Scandinavian Tobacco to launch the cheapest mini cigars on market 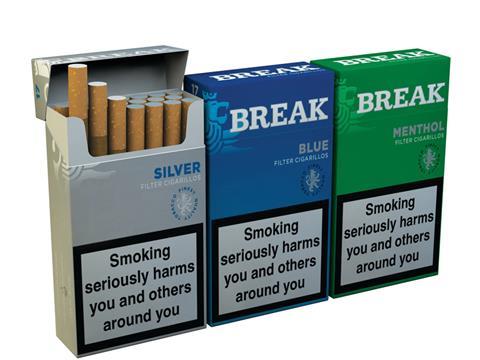 A new mini cigar from Scandinavian Tobacco Group will be cheaper than any cigarette or cigar on the market, claims the supplier.

Rolling out nationwide in mid-May, Break cigars are filter-tipped and the same size as regular cigarettes, with an Ecuador wrapper made of natural tobacco leaf. They will be sold in Silver (smooth flavour), Blue (full flavour) and Menthol variants.

Available in both price-marked and standard packs, the cigars will be priced at £4.59 for 17 sticks - equivalent to 27p per stick - while the cheapest value cigarettes on the market are currently about £6.25 for 19, nearly 33p per stick.

STG said the products would appeal to both time-pressured cigar lovers and value-seeking cigarette smokers.

“During the past three years, we have seen little cigars become incredibly popular in Europe,” explained STG UK marketing head Alan Graham. “We expect this trend to be maintained as price continues to be a focus for many smokers, which is why we are launching this sub-category into the UK market.”

Graham said this style of cigar was the fastest-growing sub-category in Europe, with 3.45 billion sticks sold in 2013 compared with around five billion cigars.

He added that it was important to bring this new type of product to the market now, ahead of the tobacco display ban being extended to small stores next April.