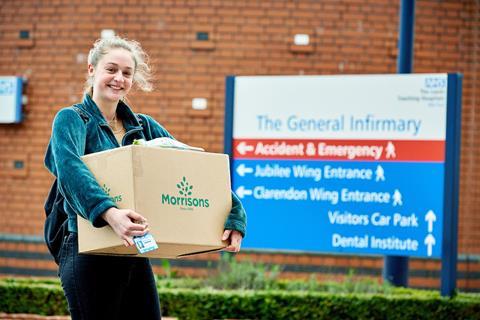 Morrisons has begun opening its stores in England and Wales for longer than the six hours currently stipulated in Sunday trading legislation, as it looks to support NHS workers during the coronavirus crisis.

The supermarket has launched a new NHS shopping hour across its stores. This will be from 6am to 7am Monday to Saturday, while on Sunday it has scrapped its browsing hour to make way for the new service - meaning NHS staff can begin shopping and buying products from 9am, while all customers will be able to shop as normal from 9.30am.

The upshot of this is that the stores are now trading for seven hours on a Sunday, when the current rules state that stores over 280 sq m can only open for six hours between 10am and 6pm.

In the early days of the coronavirus crisis last month, several retailers including Morrisons are understood to have lobbied the government to suspend the current restrictions to allow more time for shoppers to get what they needed. Subsequently, however, the issue went off the boil as new measures around rationing products and social distancing were brought in. Many retailers actually began reducing hours in order to get shelves replenished and provide a respite for staff.

However, The Grocer understands Morrisons has remained the leading supermarket voice calling for a temporary relaxation during talks with the government.

The rules around Sunday trading are enforced by local authorities and stores in breach of them could be fined. Some councils, including Conwy in North Wales and Wakefield, have publicly stated they will not be enforcing the rules at this time, and The Grocer understands Morrisons has received assurances from other authorities that no action will be taken.

“The NHS staff are doing a wonderful job in challenging circumstances,” a Morrisons spokesman said. “We are offering them an extra hour because they may have a very narrow window of time to do their shopping.”

The retailer is also giving NHS workers a 10% discount until 12 July and has rolled out a click and collect food box service from hospital car parks.