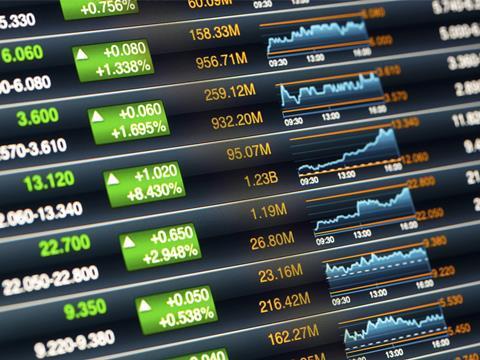 Grocery and fmcg stocks didn’t escape the carnage of ‘Black Monday’ as China’s faltering economy sent shockwaves across the world’s financial markets. Nearly £74bn was wiped off the value of the FTSE 100 on Monday as the blue-chip index slumped to below 6,000 points for the first time since early 2013. Almost all companies in London were in the red, with the rout led by the mining and oil giants that rely on China for natural resources such as coal and iron ore.

The listed supermarkets largely escaped the worst of the damage on Monday, but Morrisons and Sainsbury’s are still currently down about 9% each in August. Tesco fell 3.7% to 181.2p on the day as news emerged that bids for its South Korean arm were some way below the US$7bn the retailer hoped to raise. Despite the latest Kantar Worldpanel data showing Tesco market share hit a 10-year low, the stock has recovered slightly to 188p at the time of writing, but is still down almost 13% this month as CEO Dave Lewis struggles on with his turnaround battle.

Poundland shares were 1.6% down for the week by Thursday lunchtime, but the provisional green light from the Competition & Markets Authority for the £55m 99p Stores takeover reenergised investors on Tuesday, with the stock soaring 5.7% to 352p on the news. It has since dropped back to 343.5p and remains some way short of the heights of February when the 99p Stores deal was first revealed, pushing the shares to 415p and the market cap to past £1bn.

Canaccord analyst David Jeary said the boost to the stock was in anticipation of the “potentially substantial earnings enhancement arising from Poundland increasing the much inferior EBITDA margin achieved by 99p Stores”. House broker Shore Capital added: “When converted to Poundland, we expect the stronger range, offer and store standards to increasingly drive stronger sales densities in the acquired stores…and whilst there may prove to be some cannibalisation to the existing estate, we expect a material boost to total group turnover.”