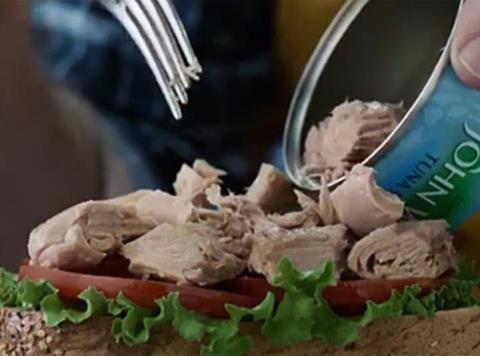 John West has defended its commitment to the sustainable sourcing of tuna after coming last in a Greenpeace league table of the UK’s major tuna brands and retailers.

The brand, owned by seafood giant Thai Union frozen Products, was ranked 11th out of 11 in Greenpeace’s annual Tuna League Table, and accused of “trashing the oceans for cheap tuna” by the NGO.

However, a spokeswoman for John West said it was “committed to the protection of the marine environment and to sustainable sourcing”, noting it was the first seafood company to sign up to WWF’s Sustainable Seafood Charter last year.

The Greenpeace table ranked brands and retailers on a host of factors including their sustainability levels, fishing methods, supply chain traceability, legality and protection of local workers, with John West singled out over its continued use of fish Aggregating Devices (FADs) to catch tuna.

“In 2011 John West guaranteed consumers its tuna would be 100% sustainable by 2016 – but with little over a year to go, a pathetic 2% of its tuna is caught in a way which minimises harm to other marine life,” said Greenpeace UK oceans campaigner Ariana Densham. “It’s clear John West has no intention of keeping its sustainability promise.”

Densham added the brand’s continued use of FADs was indiscriminately killing a host of other marine life, and undermining the “world-leading standard set by UK supermarkets”, with the likes of Waitrose, M&S, Sainsbury’s and Tesco all praised by Greenpeace for their commitment to sustainably caught tuna, including pole and line caught tuna.

But the John West spokeswoman said the FADs were “extremely effective at targeting single species and minimising bycatch” if properly managed and limited in number – while more than 90% of tuna sold by John West in the UK came from the skipjack species – “whose stocks are considered healthy”.

She also claimed that while the brand’s overarching sustainability promise had not changed, global supplies of pole and line caught tuna had also reduced significantly. “Quite simply, there is no longer enough pole and line tuna available to meet global demand or Greenpeace targets,” she said, adding John West’s total pole and line supply was “considerably higher than the Greenpeace league table suggested” due to its contracts to produce own-label tuna for the major supermarkets.

John West rival Princes also performed poorly in the Tuna League Table, with the brand criticised for its use of unsustainable catching methods.

Princes corporate relations director Ruth Simpson said the brand was “disappointed” to have scored so low but remained “committed to the long-term sustainability and continuous improvement of tuna fisheries”.

The publication of the Tuna League Table follows the launch of a major campaign by Greenpeace against Thai Union last week, with the NGO demanding it addressed alleged environmental and labour abuse in its supply chain.