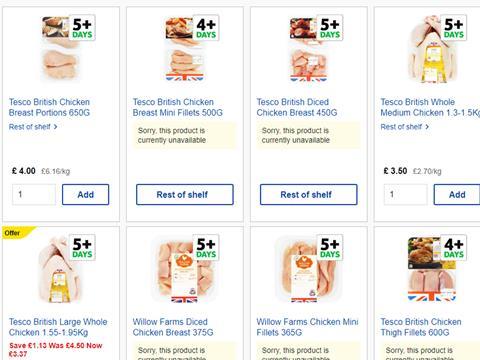 Tesco has put a widespread shortage of fresh chicken products on its website down to supply issues caused by new packaging.

Shoppers have been reporting difficulties locating fresh chicken via the supermarket’s social media channels for more than a week. At least 12 fresh chicken SKUs, consisting of diced chicken, fillets, wings, legs and whole birds were listed as “currently unavailable” on its website at the time of writing.

While a member of Tesco’s social media team initially linked the shortages to the range reset it is currently undertaking, a spokesman for the retailer this week clarified the shortages followed a “change in packaging” which the retailer hoped to resolve by the weekend.

It follows the introduction of a second stage in the retailer’s rollout of new waste-reducing portion packs for fresh chicken last month, after a successful trial in 2016.

Tesco declined to comment on whether there was any link to its new portion packs and said any shortages of chicken were “minor”.

Its spokesman added: “We continue to offer a fantastic range of chicken products to our customers.”