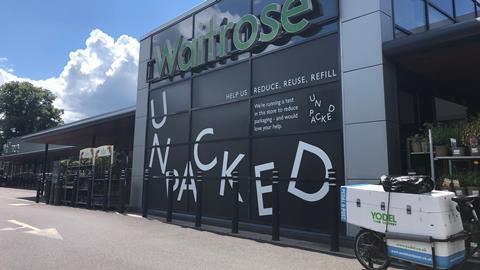 Waitrose has gone plastic-free on 200 lines in its Botley Road store in Oxford. On day three of the trial, we visit the store to see how it’s going.

After managing to keep it concealed from the media and public for months, Waitrose began its plastic-free “Unpacked” initiative on 3 June. The trial, which will run for 11 weeks until 18 August, is designed to discover how customers might be prepared to shop differently in the future to cut plastic and packaging waste.

Even before you walk into the store, you know about Unpacked, with the logo emblazoned across the fascia. As you enter, there is an elaborate Unpacked display, to give shoppers a flavour of what the project is hoping to achieve. 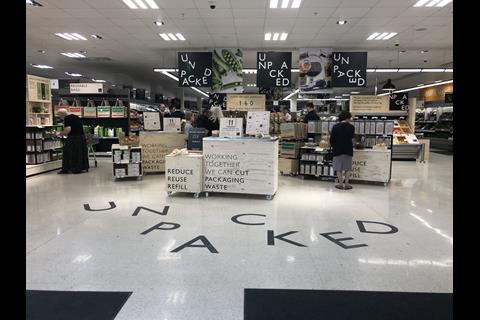 Shoppers are greeted with an Unpacked display 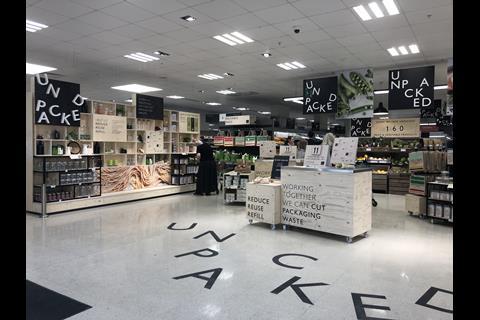 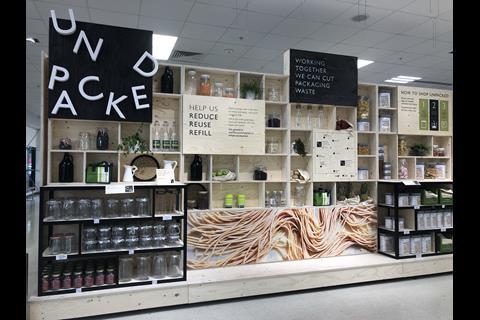 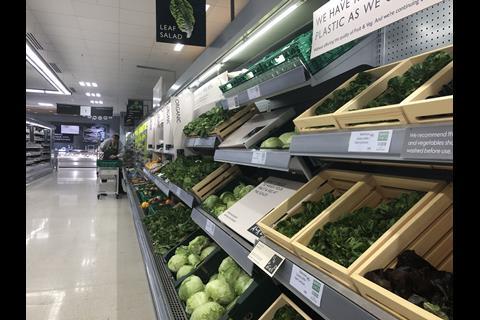 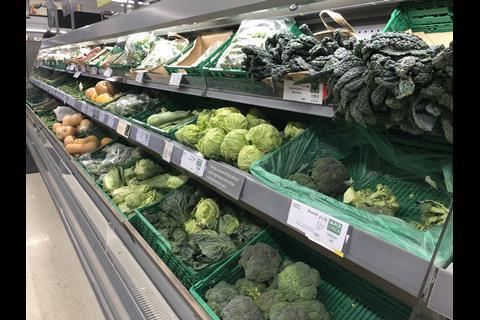 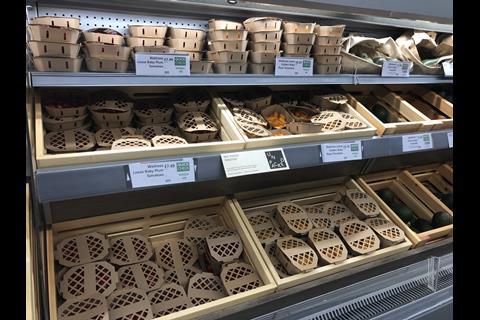 Soft fruit and veg has been put into cardboard packaging 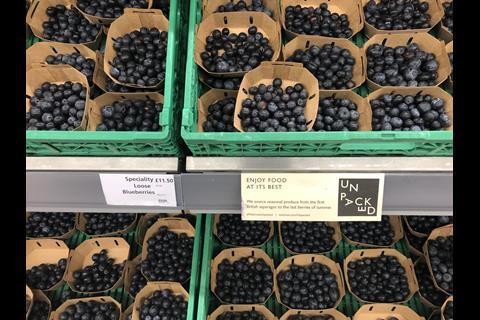 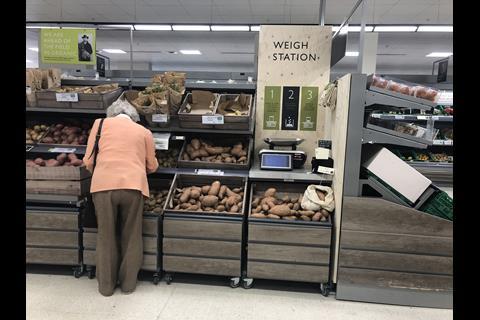 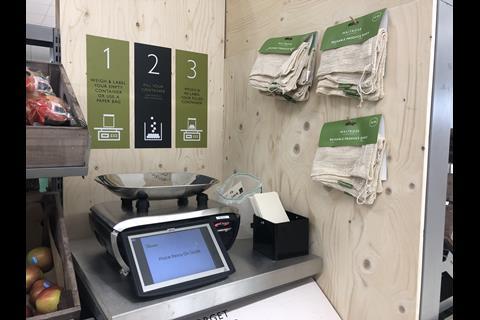 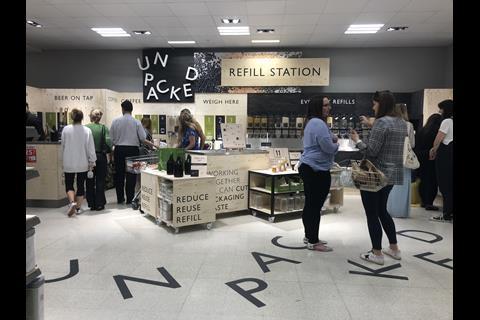 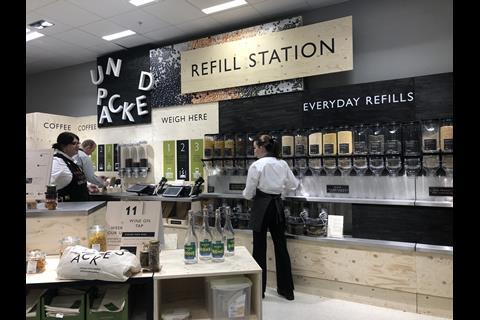 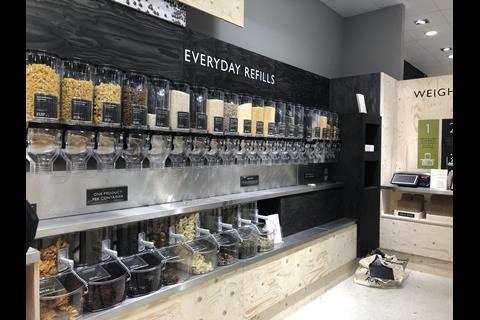 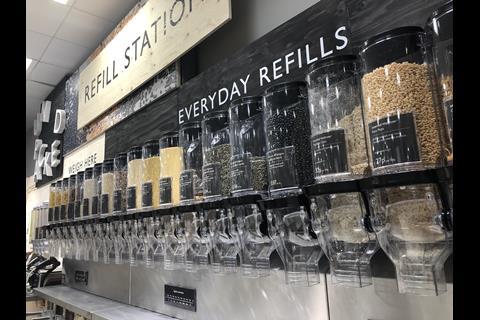 Shoppers can fill up on dry essentials such as pasta, rice, couscous, oats and cereal 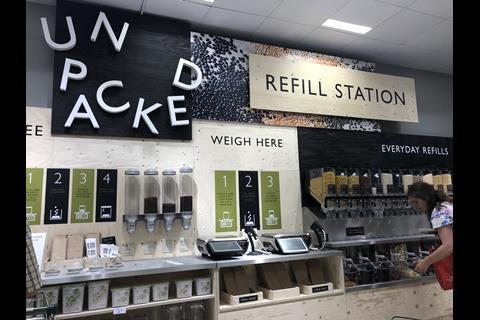 Customers can grind their own coffee beans in-store 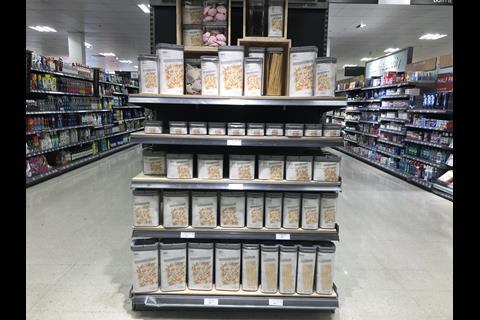 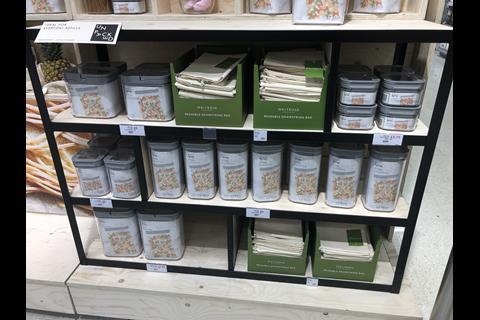 Some examples of the reusable containers on sale 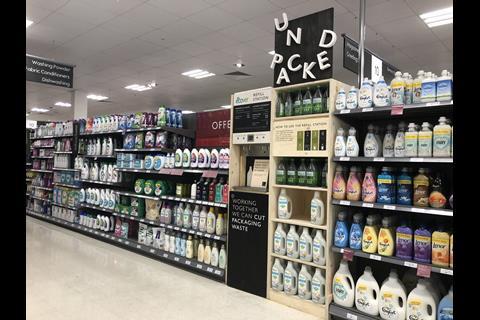 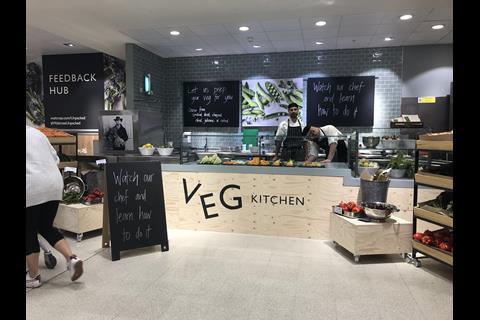 Waitrose is trialling a preparation counter, where shoppers can get their produce chopped 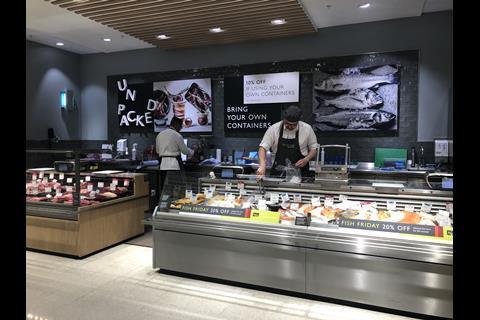 Waitrose's existing meat counters have been given an Unpacked makeover, with shoppers encouraged to bring their own packaging 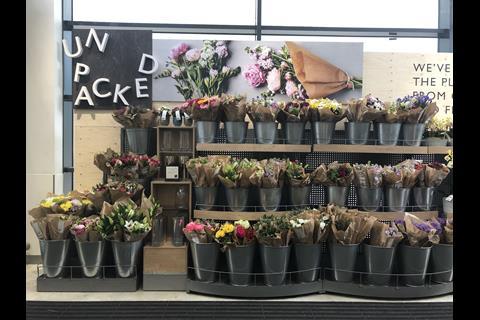 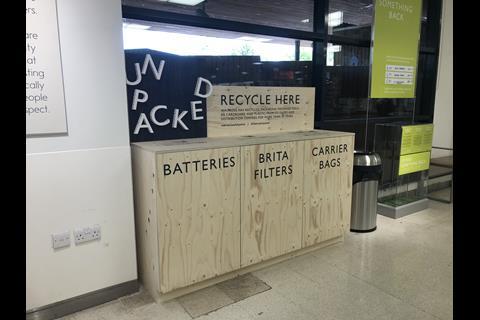 There is an area where shoppers can recycle their batteries, Brita filters and carrier bags

The trial is being carried out on just 200 lines out of thousands in the 24,600 sq ft store, but the initiative feels store-wide, as the logo and attractive branding is spread out across the store. For example, the Ecover refill station is in the household aisle among other washing-up liquid products.

The fruit and veg aisle is particularly attractive. The majority of packaging has been removed from 160 lines, leaving a colourful array of loose fruit and veg which gives a market-style feel. This is an increasingly familiar sight (Tesco, Morrisons and Aldi have all kicked off plastic-free produce trials with varying intensity) but Waitrose claims it is offering more loose fruit and vegetable lines than any national supermarket.

At @Waitrose to see their “unpacked” trial to remove & reduce #plastic from our supermarket shop - really impressive. Met lots of happy shoppers who say this is what they want. Is this the future? Only if we get on board - & pressure the supermarkets to do the same. #WarOnPlastic pic.twitter.com/POW8xwK7xt

Features inside Waitrose Unpacked include:

What we noticed at Waitrose Unpacked:

While in Oxford had to visit Waitrose #unpacked. Great idea which I hope they adopt in all their shops. Just a pity the Ecover refill machine was broken on day 3.

Thankful we don’t have that problem with #Woking weekly pop up refill market stand.

In Botley Road @waitrose having a smackerel of something b4 a singing lesson - hats off to @Waitrose for their #Unpacked initiative. Remains to be seen whether customer take-up means this is rolled out to all branches but kudos to Waitrose for doing whilst others just talk..

Not sure I'm convinced by this #Waitrose #unpacked initiative. pic.twitter.com/b4Q0qpKffa

One of the claims Waitrose makes is that its essential refills are 15% cheaper than its packaged equivalents. When we spoke to a customer (after helping her use one of the weigh stations) she said she didn’t usually shop in Waitrose, but was there to see if the refills really were cheaper. According to her, the loose courgettes weren’t any cheaper than their packaged equivalents in rival supermarkets.

Overall, this is a very well-executed initiative. The branding is great, the staff are enthusiastic, helpful and seem completely on board, and customers, although they were apparently a little hesitant at first, have fully embraced what Waitrose is trying to achieve.

Waitrose is the first to admit Unpacked isn’t perfect, and it may be difficult to roll out in its current state. Getting consumers to change their behaviour is no mean feat, especially as it’s not necessarily convenient for shoppers to have to lug their heavy glass kilner jars, wine bottles and beer growlers down to their local supermarket every time they need to shop. Then there is the risk of queuing at the refill stations. The area isn’t huge and so crowding is likely, especially at peak times.

This is not the first time a shop has offered refills on ingredients in this way. Some smaller independent stores, such as Hisbe in Brighton and Thornton’s Budgens in London, have been doing it for a while. But kudos must go to Waitrose for being the first of the mainstream supermarkets to take it this far. The trial has created a real buzz and has so far succeeded in getting customers thinking about plastic packaging.

Waitrose has been gathering customers’ opinions at two feedback stations in store and the majority of this has, so far, been overwhelmingly positive. The only negatives it has received, it tells us, has been that it hasn’t unpacked enough of its products. However, it is still early days.

Whether this approach can realistically be rolled out – across more Waitrose stores and, eventually, all supermarkets – is another matter.