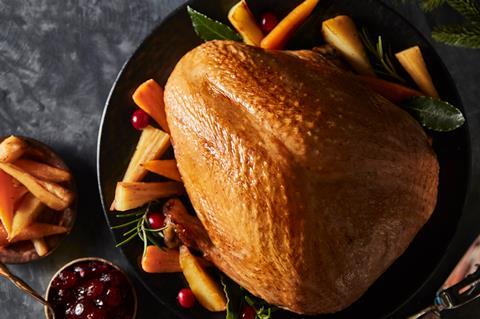 Shopper fears over the threat of empty shelves at Christmas have left major supermarkets grappling with a surge in demand – weeks earlier than usual.

Iceland this week said its Christmas frozen turkey sales were up 409% compared with the same week last year. It has ordered 20% more frozen turkeys than usual after noting a spike in online searches for ‘Christmas’ as early as July.

It seems shoppers have heeded industry warnings over Christmas shortages. A poll of 1,000 shoppers revealed more than half were worried about not being able to get enough food for Christmas. The poll, by Lumina Intelligence/The Grocer found 56% were worried to some degree and 10% “very worried”. A third said they had already begun stocking up on Christmas food and drink or were planning to before the end of October.

Demand for online delivery slots is also up. After the first of its Christmas slots were made available last week, Waitrose CEO James Bailey said 22,000 had been booked by lunchtime on day one. In an update this week, a spokeswoman said 112,000 had gone by Tuesday.

More will be released gradually but “we do expect demand for delivery slots to be high,” Waitrose said on Twitter.

Ocado has made “I’m a Smart Pass customer and I can’t book a Christmas slot” an FAQ on its website and apologised for limited slots, which it releases gradually.

“Christmas is a busy time and slots sell out very quickly, we’re sorry if you haven’t been able to get a Christmas slot in time,” the supermarket says in its answer.

Tesco is not releasing its Christmas slots to Delivery Saver customers until 16 November, while regular customers will be able to book their slots on 23 November. The dates are in line with last year’s.

Meanwhile some retailers are set to recruit a record number of temps. Aldi is hiring 1,500 temporary store staff, its ‘biggest ever’ festive recruitment push, to help pick click & collect orders as well as work the checkouts and stack shelves.

“We always need extra support over the busy Christmas period but this year especially, temporary store colleagues will play a vital role in keeping our shelves stocked as the nation prepares to reunite with their loved ones after missing out on festive celebrations in 2020,” said Aldi UK recruitment director Kelly Stokes.

And The John Lewis Partnership is recruiting over 7,000 temps – 2,000 more than last year – to meet the increased demand over the festive period.

“Shoppers tend to leave most of their Christmas grocery shopping later in November, but clearly this year we’re seeing late-November demand brought forward into October,” said NielsenIQ head of retailer and business insight Mike Watkins, “because of the concerns consumers have read and heard about, turkeys being a great example.”