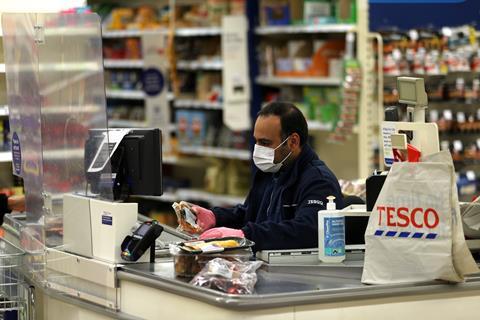 The wearing of masks by supermarket staff looks set to become common practice, after most of the UK’s grocers announced plans to provide the PPE to their store workers.

This week Asda CEO Roger Burnley announced it was issuing staff with masks to help them “feel safer” during the coronavirus outbreak, having listened to calls for greater safety from workers.

“We’ve listened to our colleagues who have said they’d feel safer if they were able to wear a mask while at work, to protect them and their customers,” he said.

Aldi also announced plans to provide masks to all staff, saying it would add to the protection provided by previous moves such as Perspex screens at checkouts.

A raft of other supermarkets told The Grocer they were making masks available for staff that wanted them, though M&S said it was instead providing personal face shields, claiming they were “easy to clean and don’t need regular adjustment, which can promote unnecessary face touching”.

Tesco said it had enough masks available for any colleagues if they chose to use them, but stressed it was still optional and advice from public health authorities was that they should not be mandatory.

Sainsbury’s also said masks were being made available to colleagues that wished to wear them, as did Lidl.

A spokesman for Waitrose said: “Visors and face masks are not mandatory but are available for partners’ sole use upon request.

“The NHS are prioritised by our suppliers so any PPE orders made by us will be redirected to the NHS as and when required.”

Iceland said it had provided face masks for all store colleagues but it was up to them to decide to wear them or not. It said initial feedback was that many were choosing not to wear the PPE.

The moves come as the UK government is considering reviewing its policy on the wearing of masks, despite current advice from the WHO and PHE saying they are not recommended for supermarket workers.