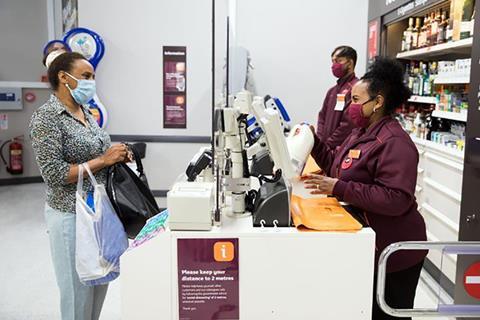 Supermarkets have introduced sweeping new measures to make stores safer, after being called on by ministers to help stop the spread of Covid.

Defra secretary George Eustice summoned supermarket bosses for emergency talks on Wednesday after ministers singled them out as locations vulnerable to spread of the virus.

This week Morrisons, Aldi, Asda, Sainsbury’s and Tesco all announced they would bar customers failing to wear masks whilst Sainsbury’s went further by announcing it was voluntarily cutting the number of customers it would allow in store by up to 35%. Asda and Tesco are both now reviewing numbers too.

“In line with other retail businesses, we have imposed even tighter rules for our customers such as reviewing limits of customers in store.”

The meeting came after Boris Johnson met with ministers on Sunday to consider introducing tighter measures, with supermarkets pinpointed by ministers as an area of special concern following a report published by PHE in November that claimed supermarkets were the most common places that people had visited in the days leading up to a positive coronavirus test.

One senior retail source warned ministers risked “demonising” supermarkets by insisting on measures likely to bring back the long queues seen in the first lockdown.

Another source added that supermarkets had strongly defended their actions during the pandemic, but stressed “the call was positive and there was a spirit of we’re all in this together, so what can we do to ensure that we work together to ensure Covid restrictions are working at their absolute best.”

However, Iceland refused to follow others in enforcing the wearing of masks.

“In view of the rising tide of abuse and violence directed at our store colleagues, we do not expect them to confront the small minority of customers who aggressively refuse to comply with the law,” an Iceland spokesman said.

Iceland’s position sparked anger among some at the meeting: “Having pocketed their business rates rebate, unlike other supermarkets, Iceland are now breaking ranks by saying they won’t enforce the wearing of masks. When you have people baying for tighter restrictions, they are not doing the rest of us any favours.”

Amid concerns supermarkets were vectors for the spread of the virus, Andrew Opie, BRC director of food and sustainability insisted “that retail is a safe environment, and firms have spent hundreds of millions on safety measures including Perspex screens, additional cleaning, and social distancing” to make retail a safe space.

“Supermarkets continue to follow all safety guidance and customers should be reassured that supermarkets are Covid-secure and safe to visit during lockdown and beyond. Customers should play their part too by following in-store signage and being considerate to staff and fellow shoppers,” he added.

Eustice has since written to retailers praising them for going to “extraordinary lengths” to ensure workplaces were Covid secure.

“In the last few days, supermarkets have stepped up again, building on previous work, to further tighten their measures,” he said.