Has Tesco finally hit rock bottom? Although there will be plenty of bumps in the road still to come, the market has come round to supporting the beleaguered supermarket after a torrid few weeks.

The shares are still about 18% down on the 230p they were trading at before its shock announcement it had overstated first-half profit guidance by £250m, but green shoots began to emerge this week. By Thursday lunchtime Tesco had recovered 8.3% since Monday to trade at 186p, having fallen as low as 168p at the start of the week. 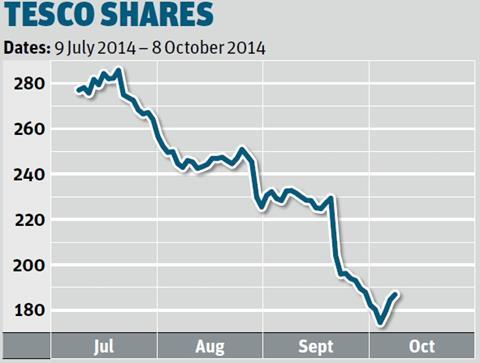 The upturn was partly driven by the City’s positive reception to Tesco’s hire of Richard Cousins, chief executive of Compass, and Mikael Ohlsson, former CEO of Ikea, to the non-exec board. Shore Capital’s Clive Black commented: “Both are expert in their field, highly regarded by investors.”

The signs of positive momentum were further strengthened by M&A speculation over the future of Tesco’s data analysis arm, Dunnhumby, which was reported to have been the subject of a £2bn approach by private-equity firm TPG.

The argument that Tesco’s troubles have now been priced in was supported by HSBC head of European consumer retail research David McCarthy, who upgraded the shares to ‘neutral.’ “We expect further bad news on accounting, pensions and a re-basing of profits, but believe much of this is now in the price,” he wrote. However, he warned there would be more “pain” and “probably more unpalatable revelations” along the way, which would “entail many tough decisions.”

Elsewhere, Cranswick fell 5.2% during the course of the week to 1,252p despite positive analyst reactions to its first-half trading update on Monday. Cranswick said performance was “in line with the board’s expectations,” with Investec analysts noting: “We anticipate that profit growth will reach double-digits in 1H as margins recover versus last year’s 1H when pig prices were rising rapidly… We make no changes to full-year expectations and continue to feel Cranswick deserves its premium rating.”