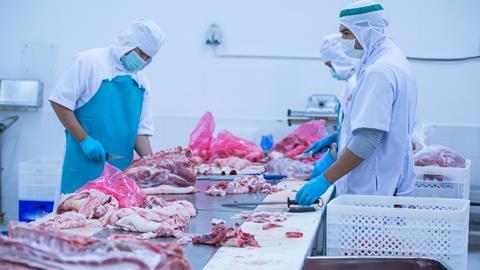 A series of outbreaks have raised alarm over worker conditions. But the industry says it has prioritised safety, and shouldn’t be a scapegoat

The phrase “we’re not out of the woods yet” used by Dominic Raab in April in one of the now canned daily briefings is surely one of the most unfortunate of the outbreak - considering the UK death toll is above 40,000 and rising.

However, until last week there was a sense the food and drink industry might just have escaped the worst fears many had for the workforce at the start of the crisis.

That has all changed, however, with four outbreaks reported at food factories since last Wednesday, amid reports that social distancing measures have failed to protect workers.

So while the hibernation for the UK begins to lift, what is going wrong at food factories and are meat plants in particular breeding grounds for the virus which could risk exposing the UK to a second wave?

The most serious ongoing case in the UK involves an outbreak at the 2 Sisters Food Group poultry processing plant in Llangefni, Anglesey, which has led Welsh ministers to consider bringing the island into lockdown as well as being forced to scrap the re-opening plans for local schools.

As of Tuesday, with the factory closed until at least the beginning of July, Public Health Wales (PHW) said the total number of confirmed cases at the plant had nearly quadrupled to 200, from 51 last Wednesday.

The company has revealed it discovered the first case at the factory on 28 May, using the home testing system which had been made available to key workers - but before ministers in Wales had rolled out its national track and trace testing programme.

The factory remained open in the weeks that followed, despite home testing discovering 26 cases.

However, PHW says the massive increase in confirmed cases followed a rapid screening exercise over the weekend which would be continuing throughout this week and resulted in more than 450 staff being tested.

Sources tell the Grocer there was a mixture of “shock and anger” in 2 Sisters management when the outbreak was discovered and founder Ranjit Singh Boparan personally stepped in to order the closure of the factory.

Three years after a Guardian and ITV undercover investigation placed 2 Sisters’ at the centre of a scandal over food safety standards, Singh was said to be furious, and determined 2 Sisters should be seen to “take the moral high ground”.

“We were just so frustrated that we had got all this way into the crisis without any cases and then, just as the national curve looks like it is coming under control, we get this flare up,” says a source.

The Grocer has seen documentation of the safety advice prepared by 2 Sisters for workers at the site, which as well as outlining measures introduced in March including Perspex screens, and visors for workers unable to social distance, also describes a raft of other steps to encourage social distancing.

These included identifying critical roles to operations so many staff could work from home, staff being asked where possible to travel to work in their own car or by bike and staff being urged not to congregate in car parks, meeting points or smoke shelters.

However, sources have told The Grocer that despite the measures, 2 Sisters found it difficult to enforce social distancing, especially when it came to workers in communal areas.

“There were signs everywhere about keeping 2 metres but then you would find people crowded around together smoking”, says a source.

The Anglesey site is also, The Grocer has learnt, the smallest in the 2 Sisters estate, which has raised concerns that it has been harder to keep staff apart.

But industry insiders are claiming a wider cause is the reality of the typical workforce employed at food factories, which makes social distancing hard to enforce despite strict hygiene standards.

“The reality is that in many cases there is a workforce that not only work together, but live together and socialise together. Many of these people have English as a second language. There is a very large Eastern European workforce and they tend to spend their lives together.

“My sense tells me the  factory floor, with all the safety precautions in place, is probably the safest place.

“More problematic are the canteens, the smoking areas, the locker rooms, the cars they share on the way into work.

“We’re speaking constantly to our workforce about the importance of distancing and PPE but to a certain extent when you have that sort of workforce it is an outbreak waiting to happen. Once one goes down they all get it.”

The outbreak in Wales was one of three incidents in the country reported last week. Rowan Foods, in Wrexham, owned by Oscar Mayer, which makes produce for supermarkets across the UK, on Friday reported 38 staff had tested positive for Covid-19, out of a total workforce at the site of 1,500.

By Wednesday of this week that had risen to 97 confirmed cases, out of 1,000 tests conducted. The cases come just weeks after staff staged a walkout over a claimed lack of social distancing at the plant, which unions claimed had made them susceptible to catching coronavirus.

But it also this week revealed an incident centred on the Kepak Food Group plant in Merthyr Tydfil was currently being investigated, with initial reports of 33 cases since April.

Meanwhile mystery surrounds the exact number of positive cases at a factory run by Kober Ltd near Cleckheaton, West Yorkshire, an operation owned by Asda and its supply chain operation IPL, despite it re-opening its operations.

The factory, which supplies the supermarket giant with products including bacon rashers and meat joints, reopened this week, having initially been closed down amid reports that more than 100 workers were self-isolating after an outbreak of COVID-19.

Asda is still declining to say how many people had tested positive at the factory, while an industry source from a rival operation has described as “madness” the decision to re-open the factory while testing continued.

“When the number of cases is not known and the testing process is still ongoing, how can it be right that the factory is re-opening?” they said.

However, an Asda spokesman insisted the factory had been given clearance by Public Health England (PHE) to re-open and it has brought in stricter measures including temperature tests at the door for all staff.

“The site will re-open on a reduced capacity and only colleagues that have been tested and declared fit to return will be on site,” says a spokesman. Those colleagues who are self-isolating will continue to receive full pay until they return to work.”

Yet there is growing anger among unions that staff in food factories - and meat production plants in particular - are at risk.

Last month saw the tragic deaths of three workers from coronavirus at a Cranswick food processing facility in Barnsley, and the death of a Moy Park worker in Northern Ireland. The deaths followed reports of staff walking out at other factories in Swindon and London, run by DHL and Bakkavor. Both companies strongly denied breaching government guidelines.

The nightmare scenario for the industry came in the form of The Tönnies plant, at Gütersloh in North Rhine-Westphalia, Germany. It’s the scene of an outbreak which as of the beginning of this week had left 1,500 infected, and German ministers blaming Tönnies, a family-run business, for forcing an entire region back into lockdown, after it was linked to a surge in the virus’ R rate in the country.

However, it is not just German authorities pointing the finger at food plants but those in the UK too.

Welsh First Minister Mark Drakeford this week said it was investigating the theory that the “cold and damp” conditions at meat plants may make them “predisposed” to coronavirus outbreaks.

Chief medical officer Chris Whitty this week warned that meat packing factories and abattoirs and food processing plants would need to face “extremely serious” measures to ensure they did not cause further incidents.

Whitty and the Government Chief Scientific Adviser Sir Patrick Vallance both agreed that communal areas and other areas where staff socialised were more likely to be the cause than conditions on the factory floor itself.

However, union bosses are warning the series of COVID cases shows the risks staff have been facing because of what they claim are “unsafe “ working conditions and warn that more will be exposed to such a threat as the UK emerges further from lockdown.

Unite claims it is aware of “more than five other sites” in the UK where there have been reports of coronavirus outbreaks, although it has so far refused to name them.

Unite national officer Bev Clarkson says the Union has “warned time and again” that meat processing factories were a breeding ground for the virus, adding: “While it is true that there are difficulties in maintaining staff distancing at many sites, this is no excuse – especially since similar outbreaks in the US and other countries have been widely reported on.”

“No amount of preparation and vigilance can guarantee complete protection against COVID-19,” he claims. “Also, it’s important to understand that every business is limited to what it can control outside the workplace. Unfair portrayal of meat processing sites as virus epicentres is unacceptable.”

Average staff absence across the poultry meat industry is less than 5%, adds Griffiths, which includes cases of COVID-19, those shielding, carers, and other usual absences.

Another senior meat sector source claims outbreaks at food factories are not a sign that they are hotspots but more a reflection of the fact that unlike many businesses they have remained open throughout the crisis, which they say raises the prospect of many more outbreaks as lockdown is eased more widely.

“I suspect the levels of infection reflect the fact these factories remained open through lockdown, and the fact meat production is so labour intensive,” says the source.

“Processors have done all that they can in terms of protective equipment, screens and social distancing, but there is still a lot of people in one confined space.

“I’m not aware of any other outbreaks, despite what the unions suggest – we would have heard of it. There is no suggestion of a cover-up as far as I’m concerned.

“But I fear what we’ve seen with these outbreaks will only develop further among the wider population as the lockdown eases.”

Andy Dawkins, CEO of Avara Foods, one of the UK’s largest meat businesses, also believes it is unfair to point the finger at food factories.

“If our industry had been a hotbed of bad management and huge infection rates we would have had thousands of people off work, and we didn’t have that. Our absence rate is falling daily in line with the infection rate as a whole.”

“We have had to learn how to deal with this since the early days. But the fact is when pubs and cinemas do open they will be faced with exactly the same challenges.

“There will be more and more people coming into contact at less than two metres - and if this remains a highly infectious virus then you increase the risk whenever people come together.”

As Britain emerges from lockdown, not out of the woods, but hoping that the worst is over, the scrutiny of food production will not go away, but other sectors too may find they are also in the firing line.