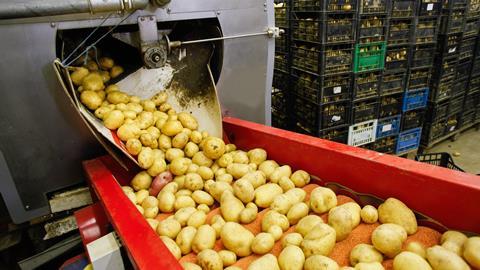 Horticulture and potato growers have voted to abolish AHDB’s levy, putting £14m of its funding under threat

The Agriculture and Horticulture Development Board is facing an uncertain future.

In October, chairman Nicholas Saphir said it was “ready and willing to change” in the face of mounting farmer unrest over how it spent their compulsory levy.

But despite a new five-year strategy unveiled in December, his pledge couldn’t stop a majority of growers voting to ditch the contentious charge.

A poll to abolish the levy by discontented horticulturists in February was followed by a majority vote in favour of ditching its potato levy last week.

Some 61% voted to abolish the horticulture levy, and 66% to ditch the potato levy  – placing over £14m of AHDB’s funding, nearly a quarter of its annual income, in doubt, along with its role in the two sectors.

Growers had grown tired of an “expensive compulsory levy body which offers little in return and doesn’t understand the realities of the marketplace”, said Lincolnshire farmer and vote organiser John Bratley.

Staff at AHDB are also said to be disgruntled by Saphir’s drive for reform, with one senior food sector source telling The Grocer it was “not a happy ship”.

Under the terms of the body’s constitution, other sectors such as beef, pork, lamb and dairy are also set to hold votes over the future of their levies over the coming months – something environment secretary George Eustice has signalled his support for, but which poses an existential threat to the entire organisation.

So what’s gone wrong at AHDB, and can Saphir – with the help of a new CEO at last, in the form of the FDF’s Tim Rycroft – navigate it through these current turbulent waters?

Though it has a strong track record of promoting certain foods such as meat and dairy, particularly through the mults, AHDB has long been seen as “too top heavy”, suggests another senior industry source, and lacking in accountability over its spending decisions. There was also a disconnect between decisions on what to spend levy payers’ money by sector boards and how they were implemented by strategy directors, they add, leading to a lack of accountability on key decisions.

Saphir agrees: “I knew before I arrived that AHDB had to change. It was quite clear carrying on as we were was not going to work.”

Its levies have been fixed for 12 years, creating an organisation with a near £70m guaranteed annual income, which it collects before prioritising expenditure. “That clearly does not work in a world where margins in the supply chain are squeezed so tightly,” he adds.

“The way in which the levy is collected is outdated”

Saphir and his team have devised a new budget structure as part of his reform programme that instead asks what levy payers need and how much it costs.

“It has been accepted internally, by many levy payers and the government,” he says. The next step is to communicate it to the wider sector.

On that final point, he admits communication comes down not just to communicating changes to levy payers, but understanding who the levy payers are. Often the levy is collected “at bottlenecks in the supply chain”, for example as product is sold at market, giving AHDB little opportunity to engage with its stakeholders.

These structural issues, suggests the industry source, explain why it has often been seen as too distant from the farmers who fund it. “All levy boards face that pressure from levy payers, it’s a difficult business model to square.”

Concern over AHDB’s structure was voiced as far back as a Defra consultation in 2018, “and not a lot has changed since then”, says NFU horticulture board chair Ali Capper.

“The way in which the levy is collected is outdated and it’s long been a cause of concern for growers,” she adds, noting “inequitable” criteria meaning, for example, strawberry growers with their own farm and packhouse would be charged more than a grower outsourcing their packing.

There is also little flexibility for the needs of smaller crop growers, she argues, with too much focus on centralised projects that may benefit some on issues such as soil health, but completely disregard how they may be irrelevant to others who may not even use soil and grow crops using hydroponic methods instead.

“Many growers feel it is a big crop institution,” she says. As a result, much of the levy board’s good work either goes unnoticed or isn’t sufficiently communicated to levy payers.

This lack of engagement was highlighted by Bratley and vote organisers the AHDB Petitioners, who secured a ballot on the horticulture levy.

They felt AHDB Horticulture’s set-up, focusing on market intelligence and R&D, ill-suited a sector – unlike in meat and dairy – that was already “highly efficient, and doesn’t receive subsidies”, he told The Grocer in November. They pushed for a potato levy vote for similar reasons.

The petitioners were further incensed by what they saw as Saphir’s attempt to skew the vote by arguing a majority of horticulture growers by value of their business had actually voted in favour of the levy.

Eustice subsequently clarified at the NFU’s conference in February that Defra – which has the final say on the levy’s future  – would respect the vote’s outcome. But its decision to press ahead with collecting the 2021/22 levy has also frustrated the petitioners. 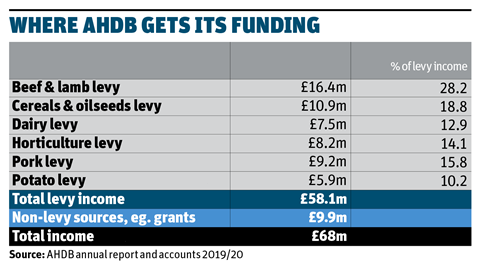 Saphir, however, is unfazed by the criticism. A food industry veteran who joined AHDB last April after an 18-year spell as chairman of dairy co-op Omsco, he stresses he was appointed by Eustice with the specific task of reforming AHDB. And he has certainly ruffled feathers since joining.

One source suggests some staff have already left AHDB in anticipation of sweeping changes, with some sector-specific knowledge lost in the process, potentially affecting conversations with the mults, particularly when it comes to marketing.

Other sources see Saphir as a “breath of fresh air” who has already made good progress despite the challenging conditions of the pandemic. As Saphir himself points out, he is still to meet fellow board members face to face.

Whatever happens next, “it’s important the baby isn’t thrown out with the bathwater”, argues Capper. She points to The Growers Better Levy Group, made up of a number of leading horticulture businesses who want to continue working with AHDB under a reformed levy.

Though a controversial view in light of the criticism Saphir faced in questioning the vote result, Capper also argues “it’s important to state tree fruit, soft fruit and mushrooms all voted to retain a statutory levy” and praises the good work undertaken in those sectors, particularly in R&D. She says a reformed statutory levy that is “answerable to growers” is the fairest option.

Saphir admits many in the growing sector will feel as if they have been “treated like Cinderella”, and he is unsure whether AHDB will retain the ‘H’ in its initials. “Horticulture is unlike any other sector, where you have one levy for 250 crops, so it’s bound to have some people who raise more levy than they gain in value. It’s up to ministers to decide what’s next and we will look at what programmes are essential,” he says, adding “we need to find ways of working together”.

“George Eustice wants to introduce five-year ballots for all of AHDB’s sectors from next spring, so that gives me a chance to bring forward the reform process,” he adds. That will include a new board more representative of levy payers and a new CEO, with Rycroft joining in August to succeed outgoing Jane King. The campaigns to promote retail sales and consumption in dairy, beef and lamb last year also demonstrated the value of the levy in these sectors, while its export work has also been a success, he points out.

And despite the disappointment of recent ballots, which may make AHDB a smaller organisation in future, Saphir argues it will remain a valuable component of the food sector.

“It will focus on the things that make a difference and will still spend up to £50m a year in key areas – that’s very important,” he adds.