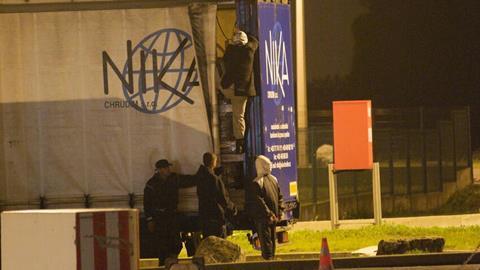 Lorry stowaways: what are the implications for food supply?

Instances of migrants stowing away in lorries appear to be on the rise, The Grocer revealed last week.

Cases of ‘clandestine infiltration’, in which the safety of food products has been compromised by the presence of migrants inside lorry trailers, were up 33% month on month in March/April this year, based on those dealt with by supply chain specialist Oakland International.

Oakland offers a distress load management (DLM) service that consists of running food safety checks on truck loads that have been exposed to risk of contamination, in order to limit food waste as much as possible.

Such has been the recent increase in demand experienced by the businesses that it is expanding its operations to create the capacity to handle 2,000 clandestine infiltration cases throughout 2022, about four times the number it responded to in 2021.

And Oakland CEO Dean Attwell thinks the rise noted by the business is likely just the tip of the iceberg, as many in the industry do not use its services.

Steve Valdez-Symonds, Amnesty International UK refugee and migrant rights programme director, links the rise to an agreement between UK and Rwandan governments, announced in April, to deport those caught entering the country via “unofficial routes” to the eastern African nation.

“The system is being made more frightening and hostile, so some people will decide it’s not safe to be seen,” says Valdez-Symonds. They may see stowing away in trucks as “more likely to help them avoid the authorities”, he adds.

So, what are the implications for the UK’s food and drink supply chain? And what solutions are there?

The Home Office says hauliers “must secure vehicles coming into the UK to stop ‘clandestine entrants’”, with drivers, owners or hirers facing fines of up to £2,000 for each person they carry.

But the reality is not all suppliers have the financial means to ensure vehicle security at every stage of a journey, says food safety expert and Lincoln University sustainable agri-food systems professor Louise Manning. Smaller businesses in particular will have “a weaker chain of custody”, she says.

One supply chain source argues that even the best attempts at vehicle security will be of little deterrent to violent mafia groups. “If you’re one guy on his own and there’s 100 people swarming around your vehicle trying to put people in the back of it, it’s very difficult for the driver.”

Another source, working at a loss adjuster handling claims from food companies linked to clandestine infiltration, says: “We have had instances where the vehicles are on the way into Calais and there are gangs of people trying to stop them, burning telephone poles and other bits and pieces to get the trucks to stop.

“I’ve had some drivers speak to me where they’ve got out of the car because they felt it moving in the night, and they’ve had guys with guns there telling them to just get back in their truck and ignore it.”

In addition to the immediate safety concerns for drivers, stowaways present public health challenges. One of the principal ways in which food can become contaminated is through contact with bodily fluids, something Manning says is almost an inevitable consequence of people spending hours inside a trailer.

Another risk arises from the fact that many migrants may be from regions with a different disease status to the UK. “They may be coming from parts of the world where foodborne diseases or waterborne diseases occur,” such as typhoid fever, cholera or hepatitis A or E, says Manning.

Then there is the issue of food waste. Food distribution companies carrying short shelf-life products, such as fruit & vegetables, have to make particularly quick decisions when faced with a clandestine infiltration. Some businesses, says Attwell, will not be aware of services such as Oakland’s, and will destroy an entire load to avoid the reputational risk arising from contamination.

Last year, Oakland disposed of 1,800 tonnes of stock and salvaged around 12,000 tonnes of food that would otherwise have gone to waste. “There should be some traceability,” Attwell says. “The Food Standards Agency should be informed and someone has to take accountability for what has happened to that stock, and that’s not happening at the moment.”

Better still would be minimising the risk of infiltration in the first place. To that end, borders should be as frictionless as possible, relying on digitalised processes rather than physical checks, says Attwell. “Anything the government does to cause those trucks to stop for any longer than necessary for an inspection process is a challenge.”

There are also new technological solutions to detecting infiltration, such as that developed by British business Contained.io. It uses a device that can be installed in trucks to detect changes in temperature, movement and CO2 levels. Any such changes are paired with GPS data to record where and when the infiltration took place.

The device will then send out an alert to the haulage company or supplier responsible for the load, with the intention of providing an opportunity to remove the intruder in time to safeguard the goods and driver, says Contained CEO Alex Szymborski.

It can also share data on the time and location of infiltrations with government agencies, in real time. The technology is currently being tested by fruit wholesaler Melon&Co and two of its suppliers.

Contained also this week received confirmation of the success of its application to be part of a government pilot of new border innovations, according to Szymborski. The so-called ‘eco-system of trust pilot’, which was outlined in the government’s 2025 UK Border Strategy, will include testing how technology might facilitate greater trade without jeopardising security.

Szymborski says the data can expose vulnerable infiltration points and could help government departments such as the Border Agency, Defra, the FSA and HMRC combat human trafficking.

“Traders are keen to solve this problem for the humanitarian reasons first and foremost, and for commercial reasons as a secondary requirement,” he adds.

However, Manning warns that to have a real impact, any new technology “needs to be cost-effective for SMEs”.

Financial constraints mean “some businesses are more vulnerable than others”, she says. If a technology is to effectively tackle human trafficking, it may mean the “the government has to come in with support” to ensure it is affordable for those businesses who might otherwise struggle, she argues.

The 2025 UK Border Strategy sets a vision for the “world’s most effective border” including new technology to make trade journeys more efficient and secure. Including all businesses in that vision may require more than innovation alone.