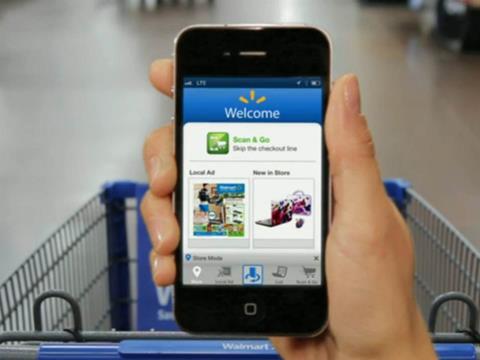 Asda will launch a long-awaited smartphone scan-and-go trial at its York superstore in May, The Grocer can reveal.

The service will allow customers to scan basket items via Asda’s mobile grocery app and subsequently pay at any till - without unloading their trolley - after scanning a QR code.

The app will also allow customers to set a maximum basket total to “help with budgeting” and notify users “in real time” of available deals and promotions on scanned items.

The retailer, which first announced plans to introduce the new kit last May, will also provide an in-store handheld reader device as an alternative option for customers. The scan-and-go trial utilises the same technology used by parent company Walmart, which now has a scan-and-go offer live in more than 200 stores.

Sainsbury’s was the first UK supermarket to take up mobile-based scan-and-go, in October 2012. It currently offers smartphone-only access via its app at its supermarkets in Tadley, Leicester North and London Colney as well as two Sainsbury’s Local stores in London. The retailer plans to double its tally to 10 by the end of this year.