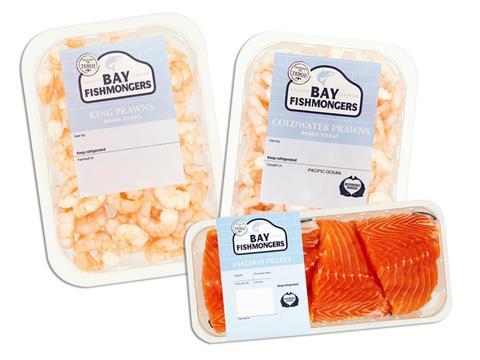 Bay Fishmongers was an extension to Tesco’s range of “fresh quality food to customers at outstanding value”, said a Tesco spokeswoman.

It is understood the salmon product is supplied by Icelandic Seachill as part of its long-term supply agreement with Tesco, signed last October. It is sourced from salmon farms in Scotland and Norway.

The brand’s king prawns are farmed and frozen in Vietnam or Thailand, while the coldwater prawns are caught and frozen in waters off the North West and North East Atlantic and Iceland. They are packed for Tesco by supplier Blue Earth, it is understood.

The products are competitively priced compared with similar Tesco own-label alternatives, with the salmon some £4.67 cheaper per kg than an equivalent bag of six Tesco salmon fillets.

More than two-thirds of Tesco’s customers had now bought Farms brands lines, the spokeswoman said. “Customers are able to save around 17% off the cost of a typical basket of 10 of the most popular meat, fruit and vegetable lines by choosing to buy products from the ranges.”