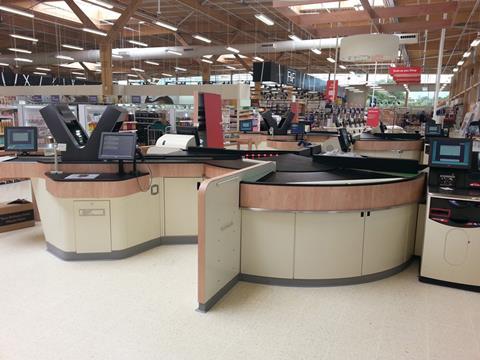 The Tesco Extra store in Lincoln features a high-tech checkout

Tesco is using the launch of its latest large store model to roll out a high-tech checkout that automatically scans products loaded onto the conveyor.

Tesco said checkout staff would be re-deployed to help customers unload their trolleys onto conveyors on the four state-of-the-art machines at its 80,000 sq ft Lincoln Extra store – accounting for nearly a third of all the checkouts – to cut down on queues and increase customer service.

The machines send products on a conveyor belt to one of three packing areas, enabling up to three sets of customers to pack on each machine at one time.

Tesco said it had already received a positive customer feedback from a trial of one of the checkouts in Fareham in Hampshire, but the new Lincoln store is ramping up the use of the technology, developed by NCR Retail.

It uses imaging technology from Datalogic to find the barcode on the side of the product without the need for the item to be handled by staff. The checkout can scan up to 60 items per minute.

“Customers can feel pressurised when they have customers behind them at the checkouts,” said a Tesco spokesman. “This is about making it a more relaxed experience.”

Tesco is not the first to trial such technology. Asda has installed a Rapid Scan checkout in its York store that can scan up to 100 items per minute.

The new Tesco store also contains the first developments of what could be a major shift in click & collect services for Tesco, with grocery and non-grocery click & collect being brought together for the first time in a drive-through centre for customers in the car park.

“It is all about making the click & collect service more convenient for customers,” said the spokesman, who added the trial could be rolled out more widely if successful.

Tesco has taken inspiration from Apple for another innovation at the store – a new Connected Technology department offering a dedicated area for tablets, smartphones and the latest games consoles.

“The idea is that there will be trained staff on hand to make it a much more customer service-led environment than previous electronics areas in the GM section,” said the spokesman, adding it was a good chance for Tesco to market its own products such as the Hudl.

Lincoln Extra is the first store to include a kitchen in a community room that Tesco will use to provide cooking lessons for children in conjunction with the Children’s Food Trust.

The Extra store, which is a new build replacing a superstore, also contains a Decks restaurant.