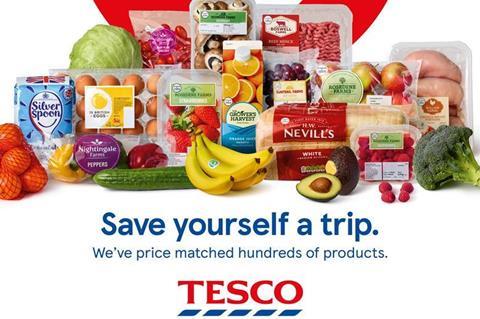 Ad an for Tesco’s Aldi price campaign launched in March

Tesco is to launch a major new price war against the discounters as it prepares for the UK to face a coronavirus-driven recession, The Grocer can reveal.

The supermarket giant has told suppliers it will not allow the likes of Aldi to gain the sort of price advantage that fired the growth of the discounters following the 2008/9 banking crash.

Tesco has held talks with suppliers to reveal it will launch a drive to everyday low pricing, with brands thrown into the mix alongside its own label armoury. The new tag line for the campaign is understood to be Great Prices Every Day (GPED).

With CEO Dave Lewis due to deliver Tesco’s first quarter’s results on Friday, the outgoing boss is to massively ramp up the price-matching campaign Tesco launched against Aldi in March, just before the UK went into lockdown.

Whereas the first phase of the campaign was based on hundreds of own label products, with a relative handful of brands involved, Tesco has told branded suppliers they will be expected to match Aldi’s prices in the new strategy. Suppliers have told The Grocer they expect other discounters to be considered in its negotiations.

Tesco’s plan will see the supermarket stop normal promotional activity, with all promotions driven through its Clubcard loyalty card, making them exclusive to Tesco’s 19 million Clubcard holders. Tesco has already been trialling Clubcard Prices as it seeks to ramp up Clubcard as an advantage against the discounters, and this will be expanded.

However, the basis of the new strategy will be driven by core availability, range optimisation and a simpler store operation.

“All investment is to go into the lowest possible retail price,” said a supplier source. “Promotions will be eliminated or have to start from the new lower price point. The message comes from the very top of Tesco and goes across the entire business.

“Apparently there is no flexibility. So we now face a major price war.

“I think this is going to have a huge impact on suppliers,” said another supplier. “Tesco got it wrong in the last recession and Aldi got the jump on them on price and they are absolutely obsessed with not allowing themselves to be outgunned by the discounters again.

”They have also said this is not just about matching Aldi - Asda and Lidl have also been mentioned.

“If Tesco really puts the squeeze on, even companies like Coca-Cola, Nestlé and Unilever will have to respond and of course smaller suppliers.

“There is going to be lots of very difficult conversation and plenty of blood on the carpet.

“One supplier was given a base price and a promotional price and they have been asked to go to a middle point in between. It’s very blunt

“This would cost that supplier roughly £400,000 a year. The supplier was given exactly a week to respond.”

A Tesco spokeswoman said: “We are always working hard to give customers great value. In March, we launched Aldi Price Match, a commitment to match hundreds of Tesco products to Aldi prices.”

Aldi Price Match has been maintained amid the challenges of Covid-19, and already includes a range of branded products along with own-label.

While Aldi carries only a limited range of brands, suppliers expect Tesco’s new strategy to be extended to those serving other discounters such as Lidl, B&M and Home Bargains.

“A recession is inevitable and it’s going to be a very severe one and supervalue or everyday value is going to be the biggest trend,” said a source.

“People like Andrew Yaxley remember very clearly what happened in 2008 when it allowed Aldi to take advantage.”

The supplier source added they believed Tesco was trying to “flex their promotional model to counter some of the key impacts of the outbreak”.

“All retailers are struggling for cash contribution.They have all been selling a lot of low-margin products and doing badly on the high-margin.

“This will allow them to try to set the agenda on margins in their promotions strategy.”

The source also said the impact of Covid-19 had shown the retailer the potential to achieve further large-scale efficiencies in the supply chain, which could see a further major wave of range consolidation, on top of Tesco’s previous Project Reset.

“For suppliers this means we are going to be taken to the precipice and will have to look over it.”

“The biggest impact for brands is not Aldi, it’s actually the other discounters,” said Ged Futter, founder of The Retail Mind. “The number of branded products here is substantially higher than in Aldi, with prices that are lower than Tesco. Can Tesco take on all retailers or will they just focus on Aldi?

“Suppliers will not want to put all investment into EDLP on iconic lines as this will ensure chaos across the whole market with a race to the bottom.”