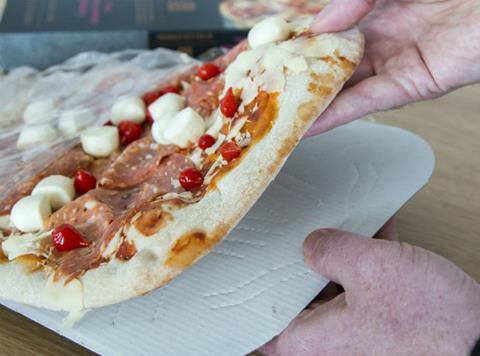 The Co-op has set out to prevent 200 tonnes of polystyrene boards going to landfill with the introduction of recyclable pizza packaging.

The retailer has replaced polystyrene with corrugated cardboard pizza discs across its 17 own-brand pizzas, which it said would create almost 450 tonnes of cardboard for recycling annually.

It said the boards, manufactured by Stateside, weighed two-thirds less than their nearest competitors, making them the lightest on the market.

The retailer has a target of making 80% of own-brand packaging recyclable by 2020. Other moves include changing from black to widely recycled blue plastic for mushroom packaging, and swapping to a single plastic material for cooked meat trays.

The Co-op will also move from black plastic to card packaging for tomatoes later this year.

“Pizza discs have been high on our priority list for some time, and we’ve been working hard to find the right replacement,” said Iain Ferguson, environment manager at the Co-op, “This change is a major step in our journey to make all of our packaging easy to recycle, and we will be making further announcements on packaging in the months ahead.”