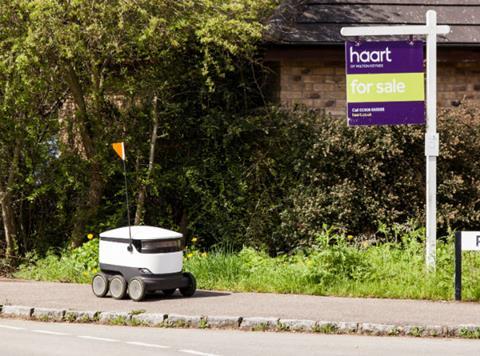 Robots have been quietly delivering groceries for a Milton Keynes branch of the Co-op for four weeks in an unpublicised rollout of the technology.

The robots, one of which was trialled for a single delivery by Tesco in London last year, travel at about 4mph and deliver up to 10kg of shopping within two miles in under an hour.

They’ve been delivering from a Co-op branch in Monkston, near to premises of the robots’ makers, Starship Technologies, following targeted local marketing using social media.

About 200 of the retailer’s products, excluding alcohol, cigarettes and frozen items, can be ordered using a smartphone app developed by Starship, so far only available for iPhone.

A human picker working for Starship buys the items at the branch and puts them in the robot, which then embarks on its unaccompanied journey to the customer.

The customers pay the usual in-store prices plus a £1 delivery charge, which goes to Starship. The Starship picker also buys the items from the Co-op branch at the usual price.

The robots, which weigh about 25kg, have six wheels and nine cameras and are tracked, with customers able to see where they are using the app.

A Starship spokesman said: “We have a very sophisticated sensor suite which allows the robot to understand the environment around it and know when to cross the road on its own.

“It’s got radars, computer vision and various other sensors and it can track objects moving up to 200 metres away.”

The lid of the compartment containing the shopping is locked until the robot reaches its destination, at which point the customer can confirm its arrival and unlock it using the app.

Between 10 and 15 robots were being used to deliver groceries in Milton Keynes and about 1,000 orders had been despatched since the app went live a month ago, the spokesman said.

The ambition was to extend the service to other locations “as soon as possible” he said, adding: “I wouldn’t want to put a time on it but I’d say it’s coming soon, definitely.

“We’re seeing a great success in Monkston. A great take-up and we’re looking to tweak and expand as soon as possible.

“It’s been an incredible reaction and a lot of people want to try it out just to see it work,” he added.

He said elements that may have to change included the fixed £1 delivery charge, which currently applied even when orders exceeded the 10kg load capacity of a single robot, requiring a second to be deployed.

Co-op confirmed the robot delivery service was in operation from the Milton Keynes branch.

“Retailers need to be innovative and agile in their operations, and the Co-op is committed to exploring new technologies and seeking new ways to innovate, getting closer to the needs of our members and customers - what they want, when they need it and creating increased consumer choice and convenience, and we have agreed to take part in a limited robot trial for delivering goods,” said Co-op head of food digital Chris Conway.