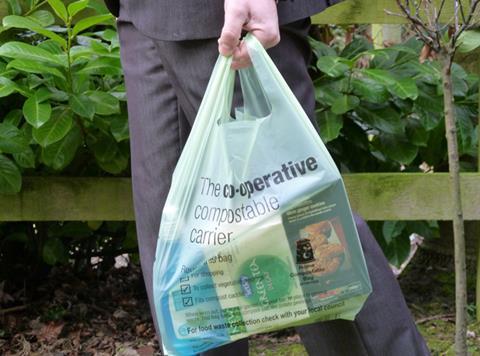 The Co-operative Group has launched a new compostable carrier bag that can be used as food waste caddy liners.

The society is making the carrier bags available in 399 stores from today in locations where local authorities have a food waste collection, following a trial in parts of the UK.

The bags are made from a combination of natural materials. The society claims they are strong enough to carry home shopping, including heavy, bulky items such as milk and potatoes.

Unlike standard carrier bags, they have also been approved for use as waste food bin liners, which The Co-op said would save customers the extra cost of buying additional food caddy liners. At 6p each, they are around half the price of food waste caddy liners bought on a roll.

“We believe they will have a significant impact upon the number of plastic bags which end up in landfill sites every year.”

He added that the new bags could play a vital role in encouraging more people to recycle food waste.

“We are the only major food retailer in the UK to offer carrier bags which are also compostable and carry the seedling logo,” he said.

“Our aim is to enable our customers to recycle more of the products they buy from us – from the leftover food and packaging, right through to the bag they use to carry their shopping home.”