18
Whey to go: how the dairy industry is tackling waste
The Dairymen 2016

Whey to go: how the dairy industry is tackling waste 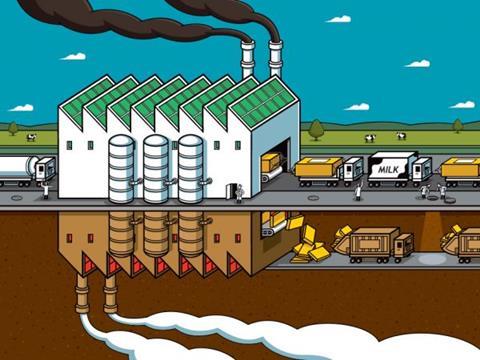 UK dairy should be crying buckets over spilt milk. The industry wasted 340,000 tonnes in 2015 alone, says Wrap, of which nearly two thirds (or 200,000 tonnes) was perfectly consumable. So huge was this mountain of milk, butter and cheese that Wrap determined dairy had more avoidable manufacturing waste than any other category in food and drink, its stream of unnecessary waste 23% of the total 870,000 tonnes.

So how has dairy become one of the worst waste offenders in fmcg? And what is it doing about it?

For Wrap these latest figures, compiled after months of analysis and visits to milk, cheese, yoghurt and ice-cream manufacturers, provide “the clearest indication yet” of how and where waste occurs, with the equivalent of 340 million litres of milk lost by the UK’s “highly complex” dairy supply chain, from small family dairies to multimillion pound conglomerates.

Liquid lost during the separation of milk, trimmings discarded on the floor as machines slice cheese and 26,000 tonnes of off-spec products rejected for sale by the supermarkets were all contributors to waste along the dairy supply chain, researchers found. Most significant, however, was that up to 60% of liquid sludge thrown out after on-site cleaning or treatment was made up of product or ingredients, much of which was recoverable.

Improvements to these processes could slash 40,000 tonnes per year from dairy waste, they estimated, the equivalent of a 7% reduction. Dairy could also double the surplus it redistributes, with scope to send off an additional 6,000 tonnes of packaged products arising from labelling errors or “quality failures” where yoghurts are slightly discoloured or butter is “too runny.”

But for some of the UK’s biggest dairies these damning figures don’t reflect steps the industry has already taken. “We’re at 99.7% utilisation so we as a business wouldn’t recognise those figures,” says Dairy Crest’s commercial director Adam Braithwaite. Waste is “something we spend a lot of time focusing on”.

Similarly Arla has already teamed up with Wrap to map more closely weak spots in manufacturing for milk, soft and hard cheese, butter and yoghurt, with a report expected later in 2016. “That’s a really groundbreaking project, which will inform the rest of the industry and take dairy down the right route,” says sustainability manager Richard Laxton, “and build on improvements many firms have already made to cut out waste in processing, ordering, and in the final mile of the supply chain.

Subscribe now to read more Dairymen articles, insights and analysis into the market to assist with your day-to-day role.

Recovering edible materials lost during production, for instance, is already a focus for major dairy players. “There’s stuff that goes down the drain as part of the normal process of separating milk, skimmed milk and cream,” says Laxton. “Historically we’ve never looked at it as a resource.” But attitudes are slowly changing, fuelled partly by a new appetite from bodybuilders for whey, dairy’s biggest by-product. “It’s a secondary resource, which has never been seen before as having any potential, but now we’re saying let’s find a route to market.”

Only in May Arla launched Maximum Yield, a campaign to raise awareness of “the untapped goldmine” of acid whey for dairy manufacturers, including its use in cream cheese, drinks and desserts.

Producing powdered whey via evaporators or filtration can be costly, however, and smaller dairies often opt instead to send it to anaerobic digestion or to be spread as fertiliser. “We’re producing high volumes but not enough to justify our own whey processing,” explains Lynher Dairies owner Catherine Mead.

Her small team do “monitor carefully” excess cheese trimmings that could end up wasted in processing, though, with these cut-offs down to only 0.5% of production.

A diverse portfolio can help prevent any salvaged trimmings from the rubbish bin, suggests Braithwaite. “For example as well as blocks of Cheddar we have small snacking products and sliced or grated products and we utilise any product we can’t use for blocks into the areas cut to much smaller units.”

If we ever do see a spike in a product that’s getting any kind of waste at a retailer we’ll sit down with them, and look at packaging and case sizes, because it’s a cost none of us want to bear.

The more “volatile” part of the supply chain, he suggests, is once finished products leave the factory floor ready for a retailer. Rejected food left to rot on pallets was highlighted by Wrap as one key problem area (across all categories), with better forecasting work between manufacturers and retailers an area “where the greatest potential impact” could be made. “Our joint forecasting processes are very tight and our planning of big activity that causes spikes in demand is very diligent,” says Braithwaite.

As a result wastage is “very, very low” and “if we ever do see a spike in a product that’s getting any kind of waste at a retailer we’ll sit down with them, and look at packaging and case sizes, because it’s a cost none of us want to bear.”

Point blank refusing to offer promotions is one way Mead says the dairy has made easier the tricky job of managing sometime erratic fluctuations in retailer demand. “I don’t want to be giving product away, but promotions also create a huge susceptibility to fluctuation, which in turn can lead to waste.”

Where - despite these steps - any surplus does remain, many dairy firms, including Arla and Müller, do now also work with the likes of FareShare, which redistributes in-date surplus to nearly 2,000 charities across the UK.

And efforts to minimise waste don’t always stop at the supermarket. With consumers chucking out six million glasses of milk each day, according to Love Food Hate Waste, many brands or manufacturers have worked hard to extend shelf life, too. A “classic example” is Cravendale, says Laxton, which lasts seven days after opening (or 21 beforehand) - more than double the average three days available on own-label varieties. “You can buy it, go on holiday, and it’ll still be fresh in the fridge when you get back.”

Ultimately, the dairy industry might have a long way to go (if Wrap’s figures are to be believed) but “everybody is trying really, really hard” adds Mead.

After all “it makes no sense for any of us to produce food that isn’t consumed. If we produce it, there’s a cost attached and if it isn’t consumed we don’t get paid. Why would we elect to do that?”