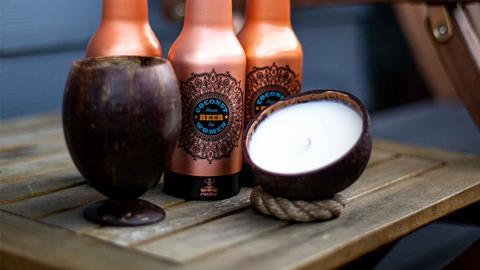 ‘Beer for women’ is patronising, but brewers could benefit from better inclusivity

It’s been a difficult year for women. As horrific acts of violence have sparked fears about safety, women have also been disproportionately affected by job losses and the burden of unpaid care. Patience over gender inequality is wearing thin. So brands looking to launch new products ‘for women’ in this current climate need to tread carefully.

A case in point is Neitiv’s newly-launched coconut flower ‘beer for women’. While no doubt well intentioned, it risks alienating the female audience it’s aimed at by playing to some frankly depressing stereotypes. Packaged in a rose gold metallic bottle, it comes with a coconut candle and mindful colouring sheet. Because, you know, women like those things.

There is even a five-step set of instructions listed on the website to guide women through using the drinking process, with clear instructions such as “Light the Coconut Shell Candle”, “Get the chilled Coconut Flower Beer” and “Rip the ring cap”. And because pint glasses are far too manly for ladies, those who don’t want to sip from the bottle can order a hand-crafted coconut shell cup.

Now, don’t get me wrong. There are some women to whom this product will no doubt appeal. But you can’t escape the fact that launching a beer specifically marketed for women in 2021 is misjudged. Because women drink all kinds of beer – stouts, ales, lagers, you name it. And overtly feminine packaging isn’t a prerequisite for them to do so. In the UK market, at least, Neitiv’s proposition seems old-fashioned and out of touch.

Neitiv claims its beer is actually gender neutral, and people shouldn’t construe the name literally. Its intention, it says, is to “raise awareness, provide solidarity” and “eradicate the negative stigma towards women drinking beer or alcohol”.

And the brand might stand a better chance of making waves in Asia, where attitudes towards female drinkers still have a way to go. Neitiv’s website lists cases of corporal punishment and vigilante attacks on women who have been caught drinking or selling alcohol in India, Indonesia and Malaysia over the past couple of decades.

But while launched with the best of intentions – to “empower” women – the final product lacks relevance for a UK audience. It’s not unusual for ladies to partake in a pint in this country – and ‘girly’ marketing add-ons are unnecessary.

Of course, Neitiv isn’t the first brand to attempt to launch a “beer for women” in the UK. Established UK brewers have made similarly misjudged moves.

Take BrewDog, which launched Pink IPA – a spoof of its Punk IPA – ahead of International Women’s Day in 2018. While the brewer claimed its pink packaging was a “sarcastic” way of addressing gender inequality, it divided opinion. The launch had “the right motivations but the wrong execution”, tweeted Dr Heather Doran.

In 2017, Czech beer brand Aurosa came under fire for launching a ‘beer for her’ in a marble-effect bottle, which it claimed was “customised to the needs of women”.

Over the past decade, Carlsberg brand Eve and Molson Coors’ Animée, which were both targeted squarely at women, have exited the market. Both brands were called out for patronising women in their gender-specific marketing efforts.

And yet, as Neitiv points out, there is an opportunity for beer in the female market. According to The Gender Pint Gap, which was published in 2018, only 17% women drink beer at least once a week, compared with 53% of men. In the report, male-oriented advertising was cited as the main barrier for over a quarter (27%) of women drinking beer. But combatting this isn’t as simple as slapping a pink label and cursive brand logo on a beer bottle. It takes some deeper thinking.

For starters, brewers should focus on making their core brands gender inclusive and move away from traditionally male-dominated ad campaigns. The key is to make women feel included in the conversation and represented – not patronised.