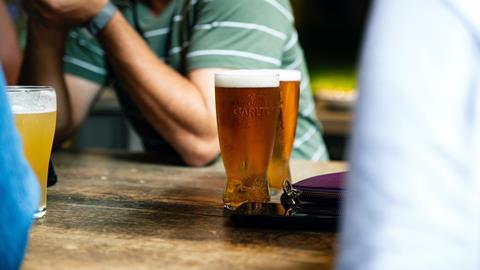 ‘Give Tesco a miss’: Tesco shows its class as full-year results approach

It’s an important week for Tesco’s new boss Ken Murphy, so it was perhaps a surprise to see him start it by urging the supermarket’s customers to go and spend their money elsewhere.

Emblazoned over full pages of several of the national papers, across social media and on digital billboards, an ad appealed to its shoppers to “give Tesco a miss” in favour of a trip to their local boozer, as they look to come back from the abyss of Covid-19.

Considering Tesco – and other supermarkets – have been frequently accused of eating the crippled out-of-home sector’s lunch during lockdown, not to mention that of the ‘non-essential’ stores that also opened their doors today, it was a clever move.

If the reaction on social media is anything to go by, most seemed to think the campaign a nice touch by Tesco, though sadly not even Murphy has the power to control the good old British weather.

Of course, for the CEO, losing a few regulars on a Monday night as they brave the continued cold spell for a long-awaited pint, is peanuts compared with the full-year results announcement due on Wednesday. Then we will see to what extent Tesco really has made hay while large chunks of the industry has been shuttered.

Some analysts were less than impressed with Tesco’s showing over Christmas despite what in any normal year would have been a barnstorming success story, so all eyes will be on this week’s fuller picture.

Murphy will be expected to provide not just healthy year-on-year sales growth, but more evidence of how the supermarket intends to make its online operations profitable amid the huge shift in habits provoked by the pandemic.

If the grand reopening goes to plan, of course, there will be plenty in non-essential retail and hospitality hoping that the Great British public will desert the likes of Tesco for more than just one day and kick-start a recovery for the ever-more endangered high street.

But Tesco seems to be facing up to the challenge with a hint of class. Even more so than Murphy’s newspaper message today, that was shown in the words of recent Tesco Grocer 33 store of the week manager, Carl Aston, of the Warfield superstore: he described the end of lockdown as “a chance for us to prove we can win the loyalty of our shoppers when the other, non-essential, stores open”.

“If they still come to us,” he added, “then that will show we’ve done a good job for people in very difficult times”. Whatever our plans for tonight, we can all say cheers to that.