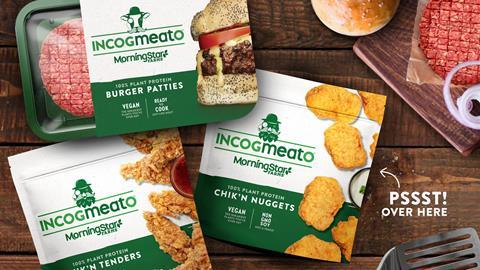 Kellogg’s UK plant-based launch is a smart one, but Incogmeato isn’t guaranteed success

What would you call your space-age brand of plant-based meat alternatives? Seems like the good names are getting gobbled up fast. There’s Impossible Burger and Beyond Meat. What’s left? Not-a-Sausage? Feat (a portmanteau of ‘future’ and ‘meat’)? The Protein Formerly Known As Mince?

Kellogg’s went with Incogmeato, which is both awfully brilliant and brilliantly awful. So, props to Kellogg’s – or, more accurately, to MorningStar Farms, the 44-year-old vegetarian brand acquired in 1999 by the US breakfast giant.

Incogmeato is due to roll out next year across the US – and it looks like it’s on the way to the UK, too. Kellogg’s has registered the brand name with the IPO, and told The Grocer it was “actively evaluating our global expansion plans for MorningStar Farms”.

And why not? Plant-based is big business all over the place, after all. Plus, MorningStar has that Kellogg’s clout, while being big enough in its own right to have a branded veggie burger in US Burger King. And its decision earlier this year to take its portfolio vegan by 2021 was deemed headline-worthy.

Which makes it nailed on for success on this side of the pond, right? Not necessarily.

Kellogg’s might be a heavyweight supplier and ubiquitous across the major mults, but its name doesn’t appear on Incogmeato’s front, likely leaving Brits wondering who or what MorningStar is.

But put the Kellogg’s monicker on there, and you create the unappetising association of breakfast cereal with uncooked ‘meat’.

While we’re on the subject of aesthetics, Incogmeato’s artwork could draw ire. The cow and rooster caricatures – both sporting a top hat, monocle and huge ‘tache – have the potential to hack off Trading Standards, farmers and the meat lobbyists fiercely keen for veggie products not to associate themselves with beef and chicken.

Then there’s Incogmeato’s range. It’s small. The two ‘chicken’ products are frozen, so they will sit alongside a selection of similar, better known Quorn products. Meanwhile, Incogmeato’s single chilled SKU, the burgers, will be going up against plant-based powerhouses like Beyond Burger, Quorn, The Vegetarian Butcher and even The Meatless Farm Co – all of which have the advantage of traction.

So, there’s no guarantee Incogmeato will be a hit in the UK, where similar brands have suffered an inglorious fate. Take Garden Gourmet, Nestlé’s flagship vegetarian brand around the world, which made its debut in May 2018 and was axed barely eight months later due to lack of shopper interest.

That said, the future is almost certainly plant-based. Peak veganism is still a way off. Health and sustainability concerns will drive innovation and demand for meat-less products – and the market is set to reach £1.1bn by 2023, according to Mintel. Given its experience and ownership, there’s no reason Incogmeato can’t cash in. It just shouldn’t bank on it.