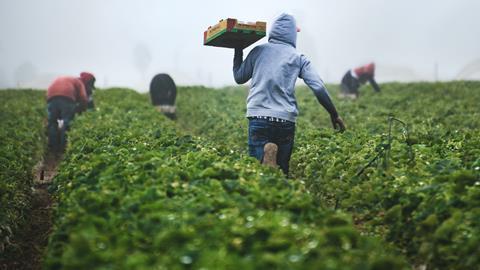 Just three weeks have passed since the UK secured a Brexit trade deal with the EU. But for anyone involved in the fresh produce industry, it probably feels like three years.

Not all of the Brexit and/or Covid-related issues thrown up in the past few weeks have been in the government’s gift to resolve. But another impending issue needing urgent attention – one Boris Johnson’s administration certainly can resolve – is how the UK is going to harvest its fruit & veg in 2021.

There are two major sources of uncertainty plaguing growers.

One is whether the Seasonal Agricultural Workers Scheme pilot can be extended in time for the fresh produce season.

The other issue is how many workers will want or even be able to come to the UK due to the extra hoops presented by Brexit and Covid-19.

On the first point, the signs are ominous. While Defra trebled the number of SAWS permits available to 30,000 (less than half the 70,000-plus workers the fresh produce industry asked for), its timetable for appointing two additional labour providers to help with the extra load looks too tight.

Under the indicative timeline on its website, Defra says two companies will be selected by mid-February with the Home Office. It will either accept or reject their proposals on how they will run the scheme by 19 March. The licensing of these operators will take place in April to June 2021.

This could leave growers with unfilled positions at the beginning of the season. Any delays could potentially mean there are significant gaps at the height of the picking and packing season.

And if you cast your mind back to the government’s previous attempts at timetabling – test and trace – you’d be right to feel a little anxious.

On top of SAWS, the government really needs to start walking the walk after all the talk about how it was going to improve the Pick for Britain campaign for 2021. This will need widespread marketing as well as a cross-industry approach.

On the second point, there are big questions over the desire of workers to come here now the UK has left the EU and whether Covid-19 will throw up any extra barriers to travelling across borders, as it did last year.

Each year, the UK has to compete with France, Germany and the Netherlands for seasonal labour and, each year since 2016, it’s got less and less attractive as a work destination for foreign nationals.

There have now been years of anti-migrant rhetoric in this country and, as the lorry drivers who were stranded in the queues in Kent without access to food, water or toilets before Christmas will attest, the UK is not the most welcoming of places at the moment.

With the UK now outside freedom of movement, the workers who might have once chosen it could well find it easier and more palatable to stay closer to home.

These workers could also find themselves financially better off too. A recent report by the House of Commons Efra Committee found the UK’s average hourly wage of €23.40 was behind that of France (€24.60), Germany (€27.70) and the Netherlands (€27.80).

Then there is coronavirus. In recent weeks, the new variant that has ravaged the UK has also spread on to the European Continent. Media outlets across the EU have branded it the ‘English’ or ‘British’ flu, which might also hinder recruitment.

For those that do still want to come over, there is a great deal of uncertainty over whether they will need to provide negative coronavirus test results and, if they do, how they will get them. This will need clarity from the authorities as soon as the UK has got a grip on the wave of infections.

Ultimately, the government is really going to need to start laying the groundwork right away if we’re going to have enough fresh produce on the UK’s supermarket shelves come the summer.

There is a lot to sort out and, as Michel Barnier would say, “the clock is ticking”. If the government can’t achieve everything in the short space of time it has, it must be prepared to lower its immigration barriers to foreign workers.

Otherwise, the food crises we’re experiencing now could be dwarfed by a huge food security problem come the summer.