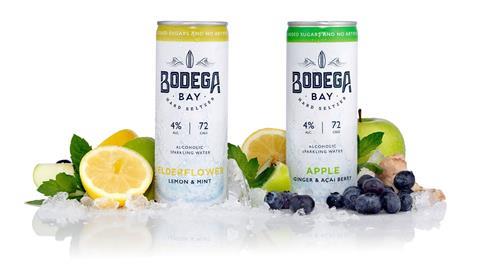 Why hard seltzers could become the new alcopop

Remember when Hooch hit the drinking scene? Back in the 1990s, it seemed pretty out there. Even in the era of Liam ‘mad fer it’ Gallagher, an alcoholic beverage that looked like fizzy pop was one step too far. Fears centred on the teenage appeal of its lemonade flavour and cartoon-style branding. Certain establishments refused to sell the brand on moral grounds. News outlets warned of teenagers wasting away their lives drinking Hooch on park benches (somehow the existing problem of cider on park benches seemed more wholesome).

How things have changed. Firstly, Hooch has had to reinvent itself for a crowd that has grown beyond boozing on benches. Its abv has fallen to 4%. Its repertoire now includes such exotic fare as passion fruit & mango flavour. And Hooch now recommends a “serve over ice” rather than drinking straight from the bottle. Teenagers aren’t what they used to be.

Secondly, the controversy around alcopops has well and truly disappeared. That much is evident by the latest incarnation of the alcopop to hit the shelves: hard seltzer. Essentially, it’s a seltzer with an abv content. Over in the US, the format has taken the market by storm by playing on fizzy pop credentials, while largely managing to avoid negative press. Instead, the media has happily latched onto “the drink of the summer” with rankings and taste tests aplenty.

Granted, these brews couldn’t be much further away from the original Hooch. The hard seltzer brands of the US – see White Claw, Bon & Viv and Truly – boast sophisticated flavours that include notes of basil, cucumber and rosemary. They are also going big on the health element. Many of these seltzers are sugar-free and under 100 calories, making them a better choice for your waistline than your standard beer or wine. At around 5% abv, they’re not too alcoholic, either.

Thanks to all of the above, Nielsen figures valued the US hard seltzer market at just shy of $500m (£400m) in 2018 – a triple-digit increase on the year before.

It’s a movement that could easily translate to the UK. Although seltzers haven’t taken off here in the same way as the US, they are growing in popularity. In the wake of the sugar tax, consumers are also increasingly health-conscious about what they drink. Plus, the UK loves alcohol in a can – as evidenced by the sheer level of support for Diane Abbott drinking a tinned mojito on a train. (M&S sold out of the mojito shortly after the incident, making it one of the few times an MP has proven a true trendsetter.)

Brands are already testing the waters. Bodega Bay (pictured above) has just launched its seltzer online and in selected UK bars and restaurants, with an expectation to “fill a huge gap in the market”. Kopparberg launched alcohol-infused ‘Aqua Spritz’ Balans back in January. It may not be long before bigger brands follow. Smirnoff and Corona already have their own seltzers in the US, which means a UK launch wouldn’t be too much of a leap.

So move over Hooch – the new generation-defining alcopop is on its way.