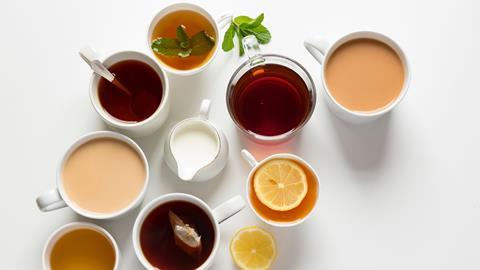 Brits still love a cuppa, and black tea remains the hot favourite across all age groups. But what do consumers make of fruity blends and iced tea? Do they feel there’s enough choice in the aisles? And where do they stand on matters of ethics and sustainability?

1. More than one in 10 consumers drink tea at least six times a day 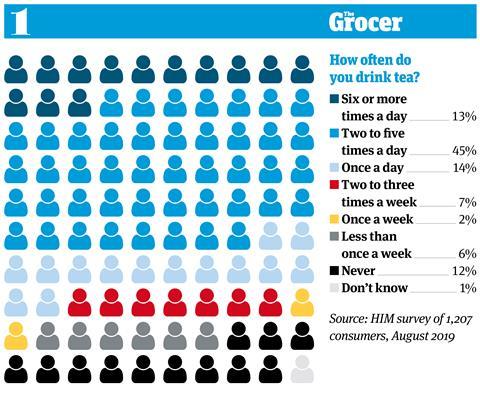 So much for Brits dumping tea in favour of coffee. Britain remains a nation of loyal tea drinkers, according to our research. Three quarters of consumers drink a cuppa at least once a day. And a sizeable 13% drink at least six cups daily.

2. Black tea is most frequently drunk across all age groups 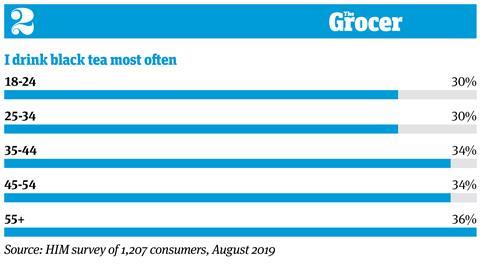 Fruity, herbal and decaf brews may be driving growth in the tea market, but traditional black tea is still Britain’s go-to cuppa. A third of consumers say they consume black tea more often than any other type.

Herbal tea pales by comparison, named by only 9% of consumers as their most frequent brew. “Black tea currently accounts for 85% of the total tea category, and we believe the opportunity in the sector is huge,” says Unilever’s Detsiny.

However, there is some variation across the generations. Black tea is the most regular brew among 30% of the youngest age group, compared with 36% of the oldest. That’s partly because younger consumers more adventurous in their tea choices.

Among the 18 to 24-year-old age group, 39% drink herbal tea and 26% drink fruity brews. Those figures fall dramatically among the 65-plus age group, of which just 14% have a herbal cuppa and 10% drink fruity infusions.

3. There is a gender split in fruity tea consumption 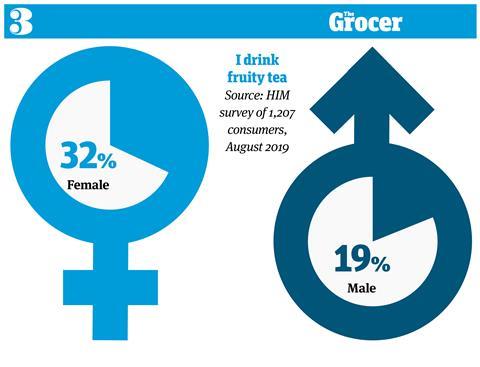 It may not come as a surprise that fruity tea appeals most to women. In terms of packaging and marketing, these blends lean towards the female market. It appears to be paying off. Roughly a third of female shoppers buy into fruity tea, compared with less than a fifth of men.

It’s not just fruity tea that has a gender split, though. Women tend to drink a wider array of tea as a whole. Herbal tea reaches 35% of women, compared with 25% of men. Similarly, 19% of women drink decaf tea, a figure that falls to 15% of men.

And female respondents are also slightly more likely to drink iced tea. However, black tea reigns across both genders. It is the most frequently consumed type of tea among 35% of women and 32% of men.

4. Breakfast is the most popular black tea blend

When it comes to black tea choices, consumers are a pretty traditional bunch. Breakfast is by far the most popular blend going, favoured by 45% of consumers. That number falls sharply to 19% for Earl Grey, and further still to just 4% for Darjeeling and Assam blends.

The love for breakfast tea is pretty universal across the demographics. In terms of regions, breakfast has its strongest foothold in the East Midlands and Yorkshire, where 53% of consumers name it their favourite black tea blend.

Londoners tend to be a bit more experimental in their tea choices. Breakfast is still the leading brew – favoured by 42% of consumers in the capital – but other blends also have a strong following. Just over a quarter of Londoners named Earl Grey as their preferred black tea blend, and 8% came out in favour of Darjeeling.

5. Quality is more important than price to tea consumers 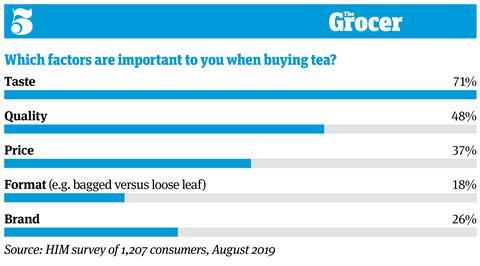 If there’s one thing Brits won’t sacrifice, it’s the quality of their cuppa. Even as consumer confidence falls, price is still only the third most important factor in tea choices, named by 37% of consumers. By contrast, a whopping seven in 10 consumers said taste was important, and nearly half cited quality as a critical factor in their choice.

Price sensitivity does vary with age, however. Younger consumers tend to be the most sensitive. Four in 10 18 to 24-year-olds named cost as an important factor, a figure that rose to 47% of 25 to 34-year-olds.

By contrast, just 29% of 55 to 64-year-olds said they were concerned about the price of tea. Among this age group, taste was even more of a consideration, cited by 75% of respondents. In terms of regions, Scotland is the most price-sensitive. There, 44% of shoppers said price was a motivation in their tea choices, compared with just 20% in the north east.

6. Tea addiction is highest in the capital 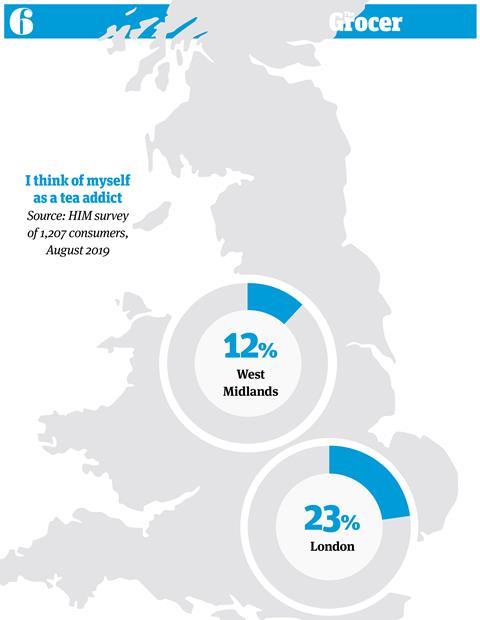 The capital is home to the highest number of tea addicts. There, nearly a quarter of consumers describe themselves as dependent on a cuppa. That compares with just 18% of the total sample. And only 12% in the West Midlands, where tea addiction is at its lowest.

Still, it’s not just Londoners who find themselves disproportionately attached to their brew. In terms of age groups, 25 to 34-year-olds are most dependent on their cuppa. Among this demographic, 29% describe themselves as tea addicts, compared with just 7% of 65-plus consumers.

Morning seems to be the most common  time for consumers to need a fix. A sizeable 32% of consumers say they don’t feel able to start their day without tea. Meanwhile, 29% say they like to drink

7. Six in 10 believe there is plenty of choice in the tea aisles 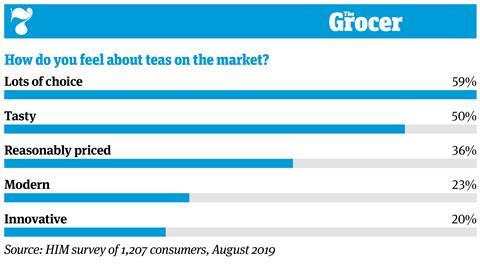 From modern and fruity blends to traditional black teabags, the tea aisles are home to plenty of variety. That seems to have hit home with shoppers, who largely feel there is plenty of choice.

That doesn’t necessarily mean they are excited by what’s on offer, though. Only a quarter of consumers described the teas on the market as modern, and one in five described them as innovative. It suggests there is room for a little more excitement.

The oldest demographic is most critical in this aspect. Only 10% of the 65-plus demographic felt the teas on the market were innovative and 11% felt they were modern. That contrasted with the 25 to 34-year-old age group, of which 33% felt the selection was innovative and modern.

This may have something to do with what these age groups are drinking, though. The younger age group is more likely to experiment with fruity and herbal blends, while older consumers tend to stick with black tea. 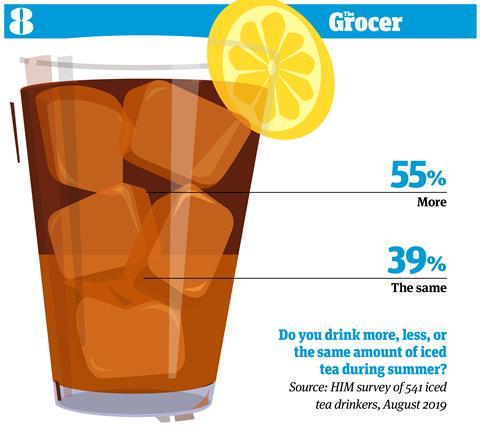 Iced tea is still far from being a universal proposition. Only half of consumers said they drank an iced brew. And of those consumers, more than half were swayed by weather conditions. A substantial 55% of iced tea consumers said they upped their consumption in the summer. Which poses obvious limitations for the market potential.

However, there is some good news. Four in 10 iced tea consumers said their consumptions was unaffected by levels of sunshine. Plus, iced tea is proving more popular among younger shoppers. Among the 18 to 24-year-old age group, an encouraging 62% said they drunk iced tea.

That compared with 31% of the 65-plus age group. In terms of regions, consumption is highest in London, where 66% drink iced tea.

9. The majority of consumers think ethical tea is important 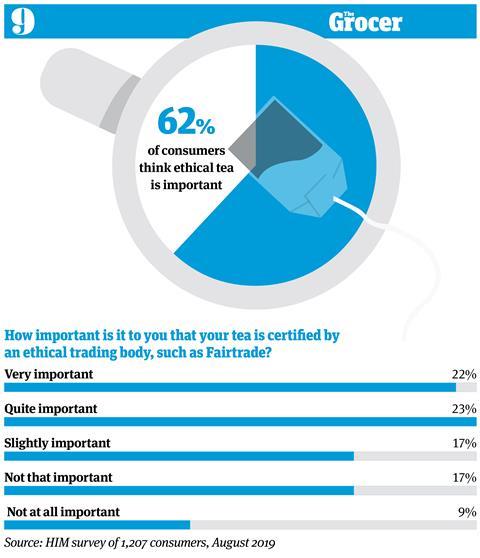 Tea has always been a focal point for ethical trading efforts. And consumers seem to genuinely care about how their tea is sourced. For proof, just look at the furore over Sainsbury’s moving away from Fairtrade tea.

But does this really influence buying habits? Consumers think the answer is yes. Nearly eight in 10 said it was either very or quite important to buy a tea that has been certified by an ethical trading body.

According to Unilever’s Hazel Detsiny, that number is only going one way. “Ethical spending is continuing to rise as consumers become more selective with their purchases,” she says.

The figures back up her point. For younger consumers are leading the way with an increasing focus on ethical trading. Among the 25 to 34-year-old age group, 35% said it was very important to buy a tea with ethical certification. That number declined to just 12% of 65-plus consumers.

There was also some regional variation. In London, 38% considered an ethical trading body very important when choosing a tea, compared with just 12% in Yorkshire. 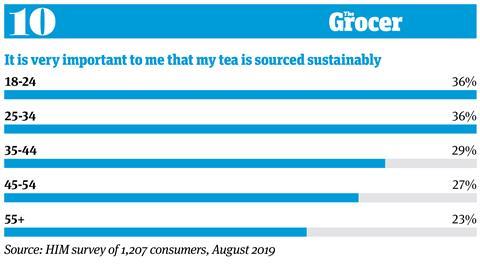 It’s not just ethical trading that has got younger consumers hot under the collar. The younger generation is also more concerned about sustainability than their older counterparts.

More than a third of consumers aged between 18 and 34 believe it is very important to buy tea that is sourced sustainably. That number gradually declines with age to 23% of over-55s.

Considering Londoners are the most ethically minded, you might expect them to lead the way in sustainability too. However, that’s not entirely true. The most ecoconscious tea drinkers are in the north east, where 42% describe sustainability as a very important factor in their tea purchases.

That figure falls marginally to 39% in London. The lowest figure was in the East of England, where just 14% of consumers described sustainable sourcing as very important.