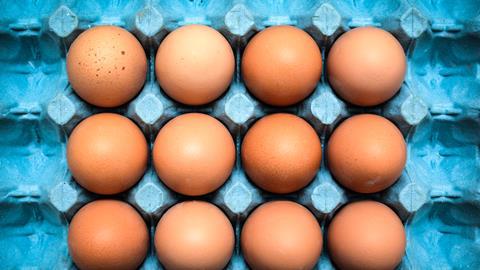 Eggs are booming. Consumption is growing – reaching a daily habit for some – and consumers are backing British. However there are some points of debate, including the sourcing of egg-containing products – and the best way to have your eggs in the morning

1. Six in 10 consumers eat eggs more than once a week 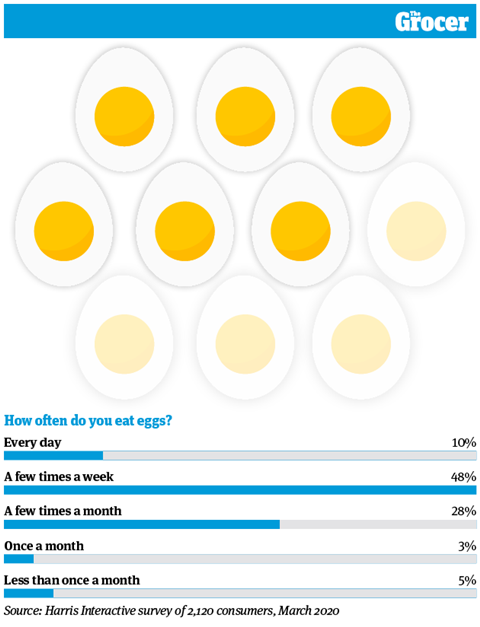 Whether boiled, scrambled or fried, British consumers love eggs. One in 10 eat eggs every day, and half consume them a few times a week. Only 5% of the 2,120 consumers surveyed by Harris Interactive for The Grocer said they never ate eggs.

Encouragingly, levels of consumption are high across all demographics.

Across all age groups, genders and regions, at least 90% of the sample said they bought into eggs to some extent.

There was also some variation in the regions. In London, a sizeable 19% of consumers said they ate eggs on a daily basis. By contrast, only 7% of respondents in the Midlands and the south east of England said the same.

Finally, men and women reported some differences in their habits. Although both had high levels of overall consumption, 13% of men reported eating eggs every day compared with 8% of women.

2. For a quarter of consumers, that frequency is growing

Eggs are becoming more popular. That’s the main takeaway from this table, which reveals 24% of consumers are eating eggs more often than they were a year ago. And only 14% are eating them less often. That pattern is present across almost all demographics, but most pronounced across young people. Four in 10 of the 18 to 24-year-olds in this survey said they had increased their egg consumption since last year, compared with 11% of over-55s.

British Egg Industry Council chairman Andrew Joret says there has been a “long-term trend” of increasing egg sales. “There are a number of factors for this, from consumers seeing eggs as a meal solution to the dispelling of myths, such as cholesterol,” he says. “However, in recent years, the biggest driver for growth has been consumers seeing eggs as a healthy food, which has meant that they are increasingly likely to pick them over other foods.”

3. Versatility, taste and value are the key selling points 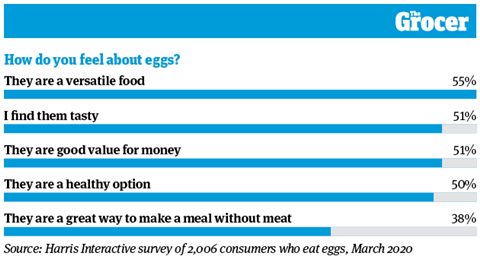 Eggs have a wide range of perceived benefits, from their nutritional content to their value for money. As this table shows, versatility emerged as the top benefit for consumers by a small margin. That was followed by taste, value and health.

Older consumers are most likely to value these benefits. Among over-55s, 68% agreed eggs were a versatile food, compared with 39% of 18 to 24-year-olds. Similarly, 61% of the oldest age group said they were good value for money, while just 37% of the youngest age group said the same. However, the benefits of health and taste were more uniformly recognised across the age groups.

The multiple benefits of eggs beyond just value have been key to the sales uplift, says the British Egg Industry Council’s Joret. “As consumers seek healthy meal solutions, and many look to reduce their meat intake, eggs are well placed to provide the solution,” he says.

4. Fried is the most popular type of egg 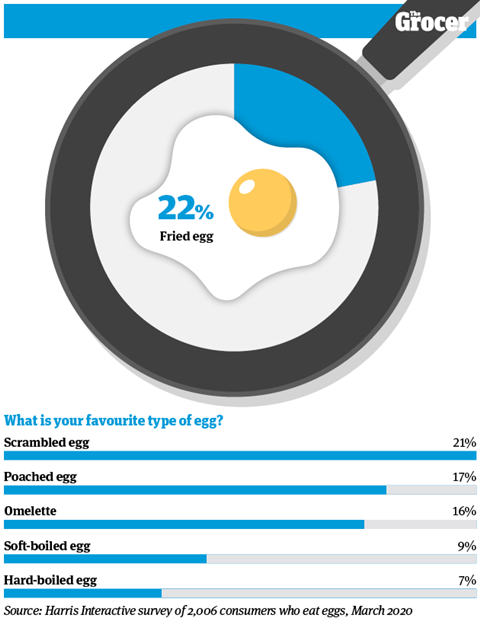 OK, so health benefits are a major driver of egg sales. But that doesn’t stop Brits dousing them in oil and heating up their frying pans. Nearly a quarter of consumers named fried eggs as their favourite style of egg, making it the most popular option on this list. That was closely followed by the healthier option of scrambled egg.

Not all demographics were equally keen on a fry-up, though. Scrambled eggs were the most popular option among younger consumers, favoured by 27% of 18 to 24-year-olds. Among this age group, omelettes were the second choice with 22% of the vote, while fried eggs lagged in third place with 19%. However, that all changed in the age group just above, the 25 to 34-year-olds. Among these consumers, 24% named fried eggs as their favourite option, making it the clear leader.

This dispute over egg choices wasn’t just across the different age groups. There were some marked regional differences, too. In the south west of England, the fried egg was the clear king, favoured by 29% of respondents.

However, in the south east, preferences changed. A quarter of respondents there named scrambled eggs as their favourite option on this list, while 19% opted for fried. Scrambled also emerged as the most popular option in the east of England.

5. Consumers in the east of England are the biggest fans of eggs 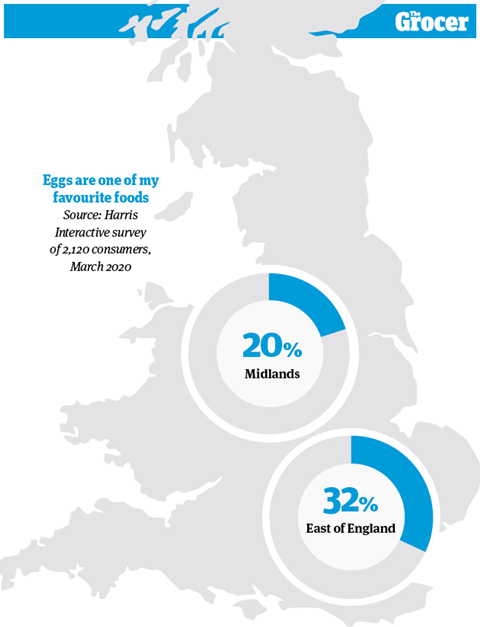 Egg consumption is high across all areas of Britain. But there are some regional differences in the levels of love for eggs, our survey found.

Consumers in the east of England were the biggest enthusiasts, with nearly a third naming eggs one of their favourite foods. That was by far the highest percentage across the country.

By contrast, only a fifth of consumers in the Midlands classed eggs as one of their favourite foods. It was a similar story in Wales, where 21% deemed eggs a favourite.

In terms of age groups, older consumers showed the highest levels of love for eggs. Three in 10 of the over-55 age group counted eggs among their favourite foods.

That fell to 18% of 18 to 24-year olds, despite this younger age group having a higher proportion of daily consumers (see chart one).

6. British eggs are associated with quality, especially among older consumers 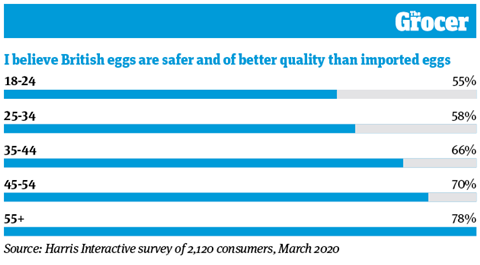 British is best. That’s the clear perception among consumers when it comes to the provenance of eggs. Overall, 68% believed British eggs were safer and of higher quality than their imported equivalents. Only 15% thought British eggs were the same standard as imported, and 5% had no opinion.

As the below chart shows, levels of loyalty to British eggs were highest among older consumers. “Older consumers may remember the issues with eggs in the 1980s and the huge lengths that the industry has gone to, in order to ensure that British eggs are among the safest in the world,” says Joret. However, he says younger consumers have “increased their awareness and understanding of the British Lion” in the wake of the industry’s £1m campaign targeting millennials.

7. The majority of consumers are confident they know where their fresh eggs come from 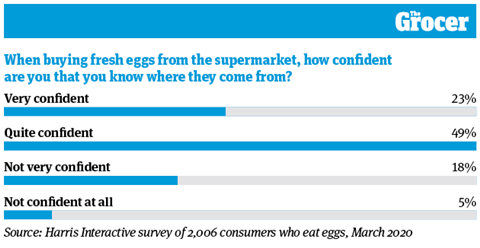 The fresh eggs on our shelves all come from the UK and their source is clearly marked. So it’s little wonder that consumers feel pretty confident in where their fresh eggs come from.

A quarter of consumers feel very confident they understand the provenance of their fresh eggs, and three quarters are at least quite confident.

Some demographics were more confident in their knowledge than others. Three in 10 25 to 34-year olds felt very confident in knowing the source of their fresh eggs. That fell to 18% of 55+ consumers, who were the least confident age group.

Similarly, three in 10 Londoners said they were very confident they knew where their fresh eggs came from. That fell to just 18% in the south east, and 21% in the east of England and the north west.

8. Women are more likely to support the removal of caged eggs 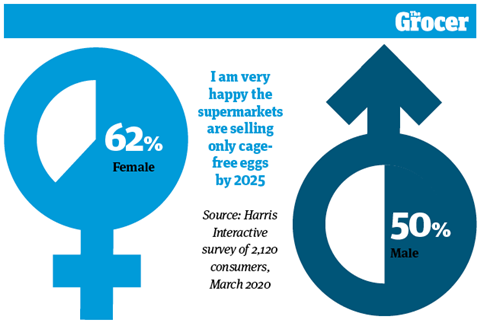 Nearly all the major UK supermarkets have committed to removing caged eggs from shelves by 2025. Morrisons reached that goal earlier in 2020.

The commitments are proof of consumer power. The movement all started as a result of petitions by a 14-year-old schoolgirl to ban caged eggs in the supermarkets, which quickly attracted hundreds of thousands of signatures.

So it’s no surprise that there is overwhelming support for supermarkets going cage-free. Eight in 10 consumers said they were either happy or very happy with the decision.

As many as 56% described themselves as ‘very happy’.

Support was pretty much across the board but, as this chart shows, there was a slight gender split. Six in 10 women said they were very happy about the decision, compared with half of men.

9. However, they don’t have the same confidence when it comes to egg-containing products such as sandwiches 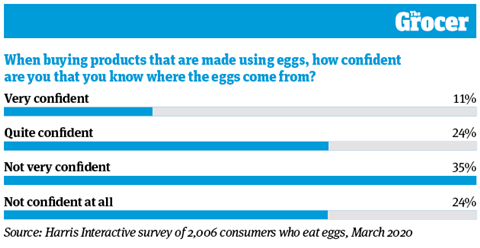 Fresh eggs may be clear in their provenance, but egg-containing products are another story. Many prepared products such as sandwiches and quiches contain imported eggs without the knowledge of consumers.

That much is demonstrated by the sheer lack of knowledge around the provenance of eggs in prepared products. Six in 10 consumers said they were either not very confident or not confident at all in the source of the eggs.

The age group with the most confidence in this area were the 25 to 34-year-olds. However, only 22% described themselves as very confident. And just 5% of the 55+ age group said they were very confident in their knowledge.

10. Morrisons shoppers would be particularly concerned over the use of imported eggs 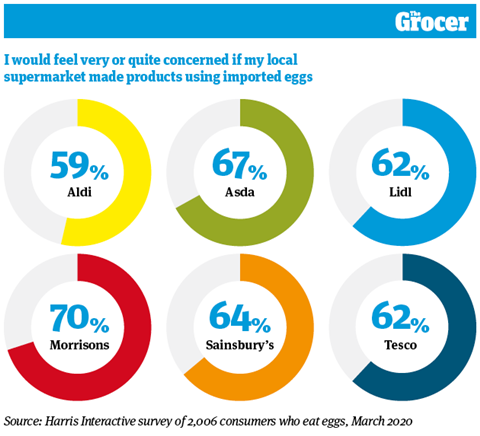 Considering older consumers have a stronger affiliation with British eggs (see chart six), it stands to reason to that they are particularly worried about the use of imported eggs. A quarter of over-55s said they would be very concerned, compared with 14% of 18 to 24-year-olds.

There were some differences in supermarket shoppers, too. Seven in 10 Morrisons shoppers said they would be very or quite concerned, compared with 59% of Aldi shoppers.

But the British Egg Industry Council’s Joret points to the relatively high levels of concern across the board as the important point. He says supermarkets should be clear about their use of imported eggs.

“It’s no surprise to us that consumers are concerned about their use, and we have been saying this for a long time,” he says. “Consumers have more confidence in a food product made with British Lion eggs, and are shocked to learn that food products are often made with foreign eggs.”