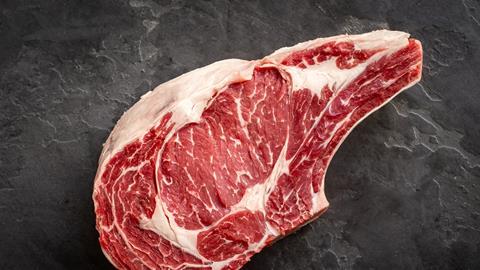 Has the plant-based movement turned Brits off of red meat? Not according to our research, which shows shoppers are still reaching for it regularly. But they are choosy in what they want – local sourcing, price, grass-fed diets and animal welfare are all important factors 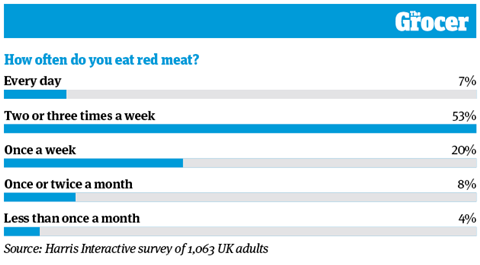 We’ve all heard the headlines about red meat consumption falling. But there’s no danger of Brits turning their backs on beef, lamb and pork just yet. Six in 10 respondents to our Harris Interactive survey said they ate red meat at least twice a week.

Perhaps surprisingly, Londoners emerged as the most frequent consumers. Despite the capital being an early adopter of the plant-based movement, 13% of the city’s residents said they ate red meat every day. That figure fell to just 4% in the wider south east area and Scotland.

In terms of age groups, 25 to 34-year-olds came out as the most voracious meat eaters. Among this demographic, 12% said they ate red meat every day.

2. Beef is the most popular type of red meat 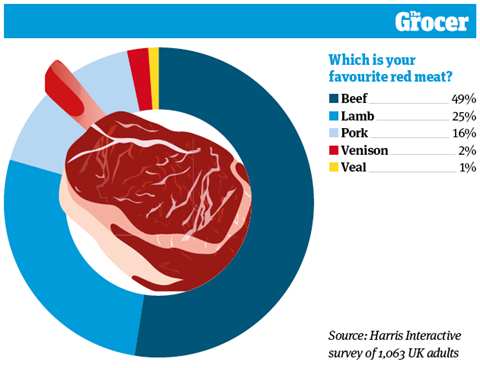 Britain is famed for its love of roast beef. And it seems there is some truth to that stereotype. Half of respondents to our survey named beef their favourite form of red meat, twice the number who favoured lamb. The likes of pork, venison and veal lingered far behind in the nation’s affections.

Although beef was the favourite across all demographics, there were some slight differences. Men were marginally more likely to prefer beef than women. It was named the favourite red meat by 52% of male respondents, compared to 46% of female.

And Scotland emerged as a particularly passionate advocate of beef. There, 60% of respondents named it their favourite red meat, compared to 39% in Wales. 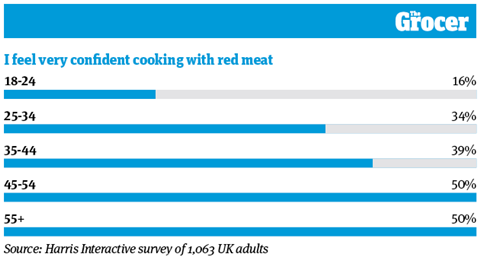 Overall, confidence in cooking with red meat is fairly high. In our total sample, 88% of respondents said they were either very or quite confident in their culinary abilities.

That self-assurance increased with age and the accompanying practice in the kitchen. Half of respondents aged 45 and over described themselves as a very confident cook, compared to just 16% of 18 to 24-year-olds.

4. Eight in 10 believe red meat can form part of a healthy diet 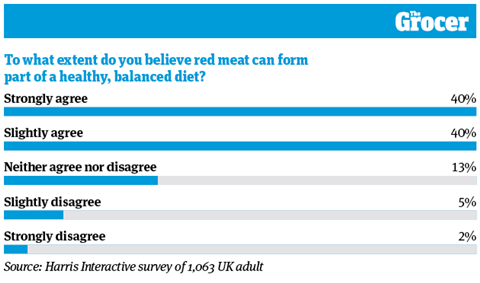 There have been plenty of negative stories around red meat and its impact on health. However, that doesn’t seem to have overly deterred consumers. Eight in 10 agreed that red meat could form part of a healthy diet, and four in 10 said they strongly agreed with that statement.

The strength of this sentiment depended on age. Among the 55+ age group, 45% strongly agreed red meat could form part of a healthy diet. That fell to 27% among 18 to 24-year-olds, although 72% at least slightly agreed with the statement.

There were also regional differences. In the north east, a staggering 98% agreed you could have a healthy diet that included red meat. That figure was noticeably lower in the east of England, where 72% agreed.

5. Brits are most confident cooking with beef 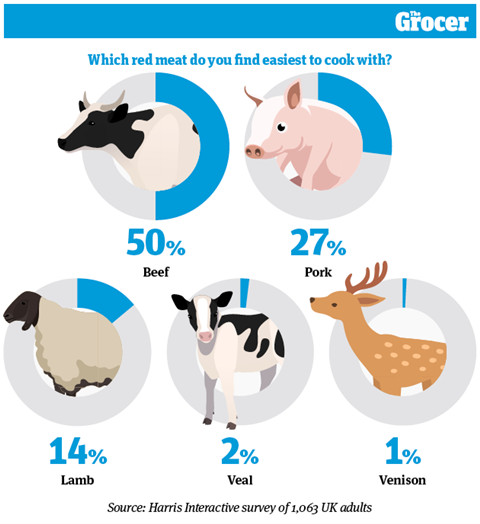 Beef is the most popular form of red meat in Britain (see chart two). So it’s no wonder that consumers feel significantly more confident cooking with beef than they do with other red meats such as lamb, pork, veal or venison.

Half of respondents said beef was the easiest red meat to cook, while pork trailed behind in second place with 27% of the vote. Only 14% found lamb the easiest to cook, despite it being the second most popular form of red meat.

The difference between meats was even more pronounced in Scotland. There, 61% of respondents named beef as the easiest red meat to cook, while only 16% said pork and 11% named lamb.

Meanwhile, Yorkshire respondents appeared more versatile in their cooking skills. Beef was still the top choice – named by 44% of respondents – but pork had 31% of the vote. 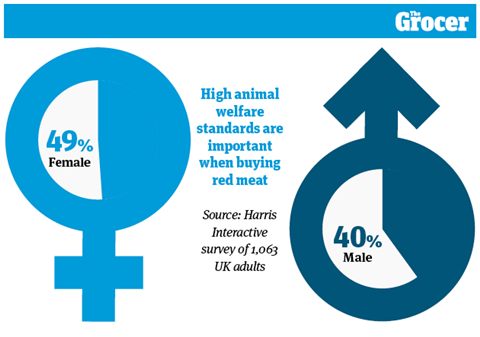 Overall, 44% of respondents named animal welfare as an important factor in a multiple choice question on what drives their purchase choices (see right).

That put it just behind fat content, cited by 48% of shoppers.

Not everyone rated it equally highly, though. For example, women were slightly more concerned about animal welfare. It was named an important factor by 49% of female respondents, compared to 40% of men.

Interestingly, older shoppers were also more likely to select animal welfare as important. Among the 55+ age group, 50% said high welfare standards would sway their purchase choices. This dropped to 39% among 18 to 24-year-old shoppers.

7. Price is the most important factor in purchase decisions 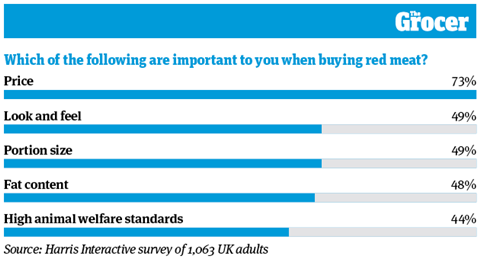 Price is an important factor in any food and drink purchase. And red meat is no exception. Nearly three quarters of shoppers said the price point would sway their decision – far ahead of any other influencing factors.

Meanwhile, look and feel, portion size and fat content were all rated similarly in importance, named by half of respondents. Only 22% saw recyclable packaging as important, while organic credentials were named by 17% of respondents.

These priorities were largely the same across all demographics. However, older shoppers were more preoccupied with look and feel. Among the 55+ age group, 55% named it an important factor – compared to 36% of 18 to 24-year-olds.

8. Seven in 10 say local sourcing is important when buying beef 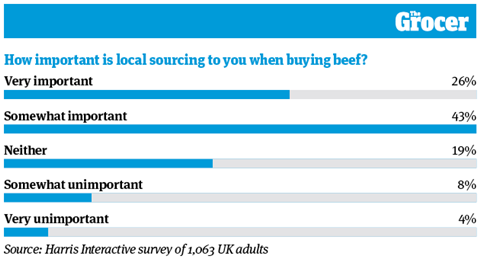 Local sourcing emerged as a key consideration when buying beef. Around seven in 10 said it influenced their purchase decision to some extent, and a quarter named it very important.

“Local gives people a sense of reassurance their beef is coming from a familiar, ethical and trusted environment,” says Emmet Doyle, GB meat market specialist at Irish food board Bord Bia, who says many UK shoppers consider Irish beef local due to the similar farming styles.

Luckily, 65% of shoppers find it either very or quite easy to see where their beef comes from on pack. But Doyle says packaging should also “communicate what benefits that provenance offers”. 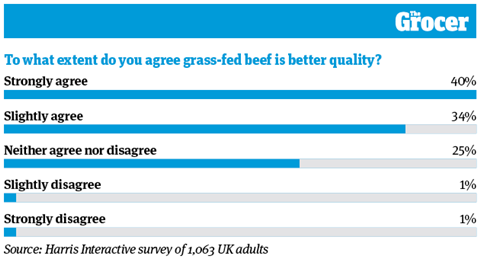 “It is great to see a clear consumer recognition of the link between quality and grass-fed beef,” says Doyle of Bord Bia. “The positive messages are certainly getting through and we’re seeing this in some of our own research, where 64% of global consumers said they would pay more for grass-fed beef.”

10. Eight in 10 are worried about US imports of red meat 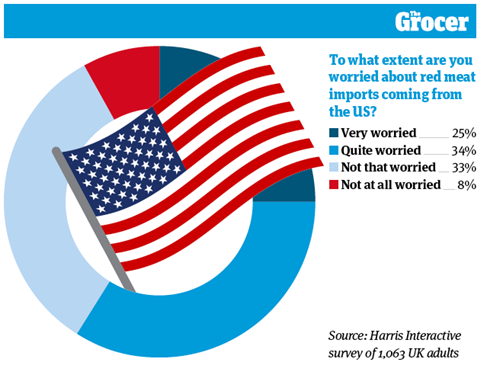 At the time of this research, there was a great deal of press coverage around the prospect of US food imports. Hormone-fed beef was a key fear as the UK looked to negotiate a trade deal. Since then, the government has vowed not to allow chlorinated chicken or hormone-fed beef on British supermarket shelves, a pledge it says will be protected by strengthening the powers of the trade and agriculture commission.

It’s a good thing, too, considering consumer sentiment. A quarter of our respondents said they were very worried about red meat imports from the US, and a third were quite worried.

Women were particularly concerned, with 64% feeling either very or quite worried compared to 55% of men.

Bord BiaBord Bia's purpose is to bring Ireland’s outstanding food, drink and horticulture to the world, thus enabling growth and sustainability of producers.