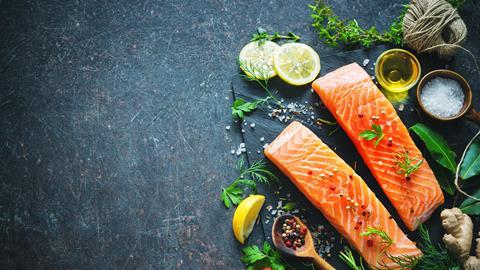 As the pandemic drives more at-home lunches, fish producers are looking to capitalise on new occasions. So what factors drive Brits’ consumption habits? Our research reveals what shoppers think about sustainability, health credentials and serving suggestions

1. Nearly three quarters of Brits eat fish at least once a week 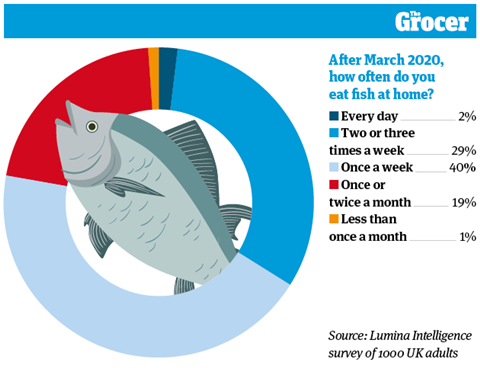 Prior to the UK’s first national lockdown last March, fish was a weekly staple for the majority of British adults. That’s according to our research of 1,000 adults conducted by Lumina Intelligence, which found 44% of people tucked in to a fishy meal once a week pre-pandemic, and 30% ate it more frequently.

The pandemic appears to have made little difference to these habits. Weekly consumption remains relatively stable at 40%, while 31% eat it more than once a week.

However, some areas of the retail market have seen a substantial boost in lockdown, says Alaska Seafood trade marketing director Rebecca Wilson. Canned saw “tremendous growth” due to initial stockpiling, she says.

You can’t beat a good fish supper. That was the conclusion of our research, which showed that dinner was the most popular time to eat fish for 79% of Brits. That was way ahead of the second most popular choice – lunch – favoured by 8%.

This may be a dramatically lower number, but Alaska Seafood’s Wilson believes there is plenty of opportunity for fish brands and retailers to grow the occasion through innovation. That’s especially as lockdown sees more lunches eaten at home. “A number of seafood suppliers have developed new products to allow consumers to create simple lunchtime meals,” she says. “These include snack pots, hot smoked salmon flakes for salads, seafood and lentil pouches and many more.” 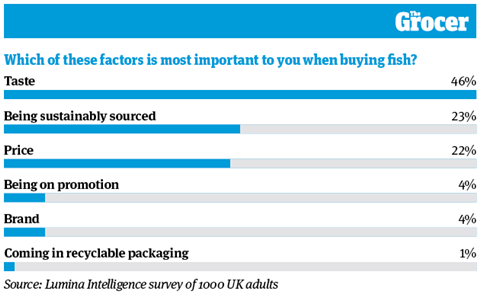 Finally, when it came to price, there was a clear age divide. Among the over-65s, just 15% named it the most important factor. At the opposite end of the scale were the 25 to 34-year-old age group, of which 30% named it the most crucial element.

4. Nearly half of Brits believe fish is more sustainable than meat 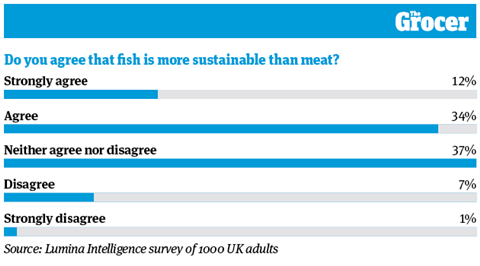 The effect of meat production on the climate is a well-documented – and much debated – topic. But how do consumers feel about the environmental impact of eating fish when compared with meat?

As our research shows, nearly half of Brits think fish is a more sustainable option. Just a over a third somewhat agreed with that statement, while 12% strongly agreed. However, that left a fair few respondents on the fence – 37% – as only 8% of Brits disagreed.

That wasn’t the only plus point in the minds of consumers. Three quarters agreed fish was healthier than meat, 52% believed it was easier to cook, and 30% preferred the taste of fish to meat, compared with 26% the other way around.

5. A sandwich or wrap is the most popular lockdown lunch option 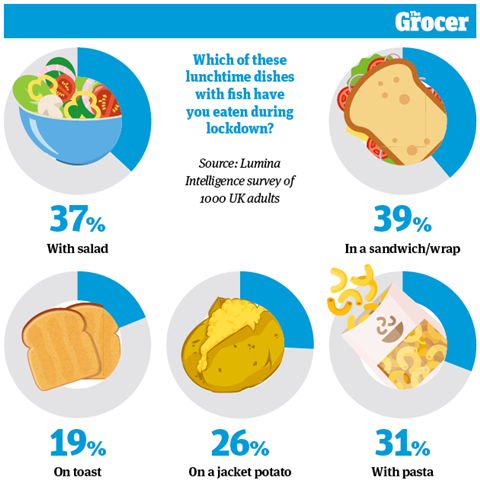 As lockdown has driven a rise in at-home lunches, a raft of new fish products have come onto the market to target this underexploited occasion (see chart two).

Alaska’s Wilson says convenience-led products such as fridge pots “are being used on toast and in sandwiches as consumers look to increase their protein content”.

Those consumption habits are reflected in our data. Despite “more people experimenting with new ways to cook different foods” during lockdown, lunch has remained a simple affair, with the humble sarnie coming in as the most popular option.

A fish sandwich has been eaten by 39% of respondents during lockdown, closely followed by salad (37%) and pasta (31%). Other classic options such as a jacket potato (26%) or toast (19%) have also proved popular with consumers.

Wilson says these lunchtime occasions are being encouraged by suppliers and retailers, which have been “using social media and influencers to show families how they can create quick and easy lunchtime meals using seafood.”

6. Londoners buy the most salmon 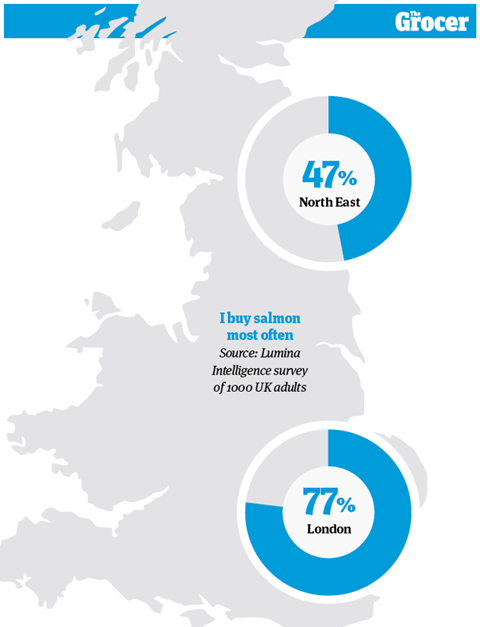 Our survey revealed some key regional differences in the types of fish consumed. In London, salmon was king, named as a frequent purchase by 77% of respondents. Salmon also took the crown in Scotland, where 62% said it was a regular buy.

However, cod reigned supreme elsewhere. That’s especially true in the north east, where it was regularly bought by 77% of respondents. Only 47% said the same about salmon.

Alaska Seafood’s Wilson puts this down to wider availability of locally sourced salmon in Scotland and “a greater access to a wider variety of seafood” in London.

Wilson believes Britain’s taste for fish & chips and fish fingers is partly responsible for cod’s overwhelming popularity across the rest of the country.

7. Almost all of Brits associate omega-3 with fish 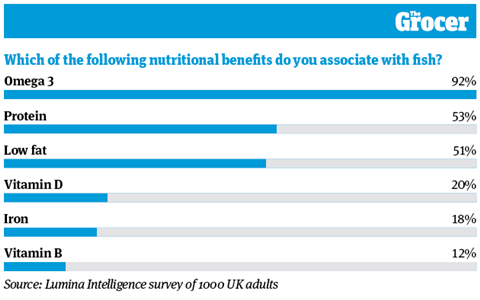 The health benefits of oily fish have clearly hit home with Brits. Nearly all of our respondents said they associated fish with omega-3 – the healthy fat present in species such as mackerel and salmon. Just over half saw fish as a source of protein, and a similar number saw it as low-fat option.

A smaller number – 20% – realised that fish was a source of vitamin D. As the pandemic raises demand for the so-called ‘sunshine vitamin’, Alaska Seafood believes brands and retailers should capitalise on that fact.

“When supermarkets and health food shops are selling out of vitamin D pills, they just need to switch the sale to wild Alaska salmon,” says Wilson. 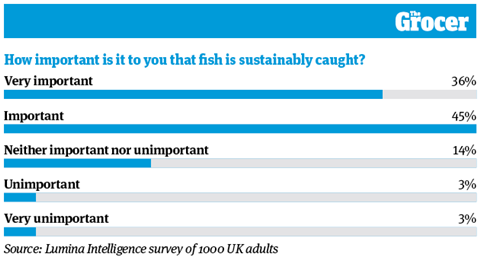 Concerns over the environment and animal welfare are more prominent than ever in 2021. For proof, just look at the record success of this year’s Veganuary, whose organisers said it spurred on 1.5 million Brits to adopt a veggie or vegan diet.

Against that backdrop, it’s no surprise that consumers are thinking more about where their fish comes from. Our research showed the majority of consumers are keen to ensure their fish is sustainably caught, with 81% of respondents saying it was either an important or very important factor.

This belief was quite equal across all demographics, with an average of 36% of people opting for ‘very important’. Meanwhile, only 6% said it was unimportant to them. 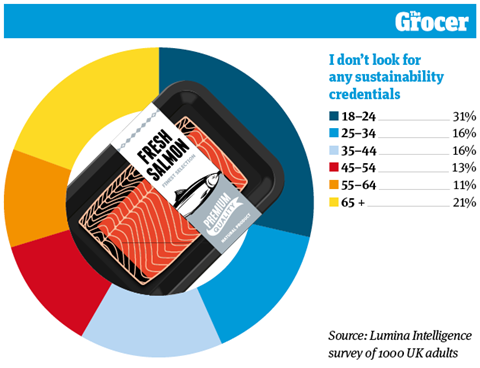 Spurred on by the likes of David Attenborough and Greta Thunberg, younger people are often viewed as the most eco-conscious age group. So it could come as a surprise that 31% of 18 to 24-year-olds say they never check for sustainability credentials on packs when buying fish. That compares with just 11% of 55 to 64-year-olds.

But this doesn’t necessarily mean they don’t care. According to Alaska Seafood’s Wilson, it’s quite the opposite.

“Younger consumers are as concerned about over-fishing as climate change”, she says. “These customers take sustainable sourcing as a given, they assume that the retailer has done the due diligence and are only selling sustainable seafood.”

10. Consumers are most likely to look for the MSC blue label 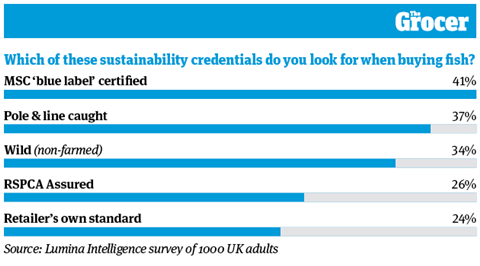 Wild, RSPCA Assured, dolphin friendly… there are many on-pack sustainability credentials present on packs of fish. But as our research shows, shoppers are most likely to seek out the little blue label of MSC certification (41%). The next most sought-after credential is pole & line caught (37%), which appears on tins of tuna. This was most effective with 55 to 64-year-olds, 50% of whom say they looked for the label when shopping.

Nearly a quarter of shoppers also look for a retailer’s own standard. Wilson believes “retailers are keen to promote their sustainable credentials as a point of differentiation”, citing Aldi’s recent MSC sustainable seafood retailer of the year campaign.