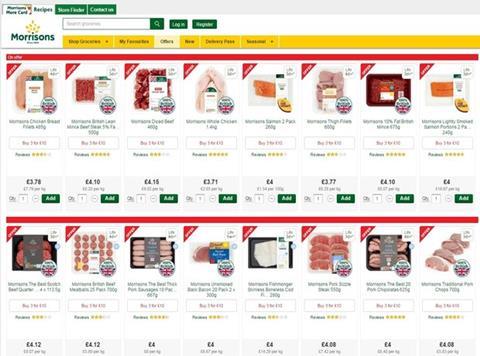 At the third hearing of the Efra select committee inquiry into food waste, members grilled representatives from Tesco, Sainsbury’s, Waitrose and Morrisons on their contradictory policies for volume offers online and in stores.

The questioning follows claims from many of the mults they have either banned or are phasing out bogofs and other multibuys that encourage higher levels of consumer food waste.

“I’m confused as to why you think volume sales in an online capacity you can dismiss as not relevant but your in-store policies are different,” said Conservative MP Simon Hart, after citing offers for two for £3 on milk available at Sainsbury’s online and three for £10 on meat products at Morrisons. “The fact is that people shopping online, an increasing market, are being encouraged to spend more on groceries in order to qualify for special offers, which is contrary to what we’re told earlier was the direction of travel.

“I can’t square that, just because one is online and one isn’t doesn’t clear it up as far as I’m concerned.”

In July last year, Sainsbury’s became the first supermarket to axe multibuy offers in its stores after customer concerns that it led to more food waste, an approach that was reiterated by both Morrisons and Tesco during Wednesday’s hearing. Tesco claimed to have ended all fruit & veg bogofs and said it reducing other special offers “with a volume link” by 80% on other fresh food.

Head of corporate responsibility at Morrisons Steven Butts claimed that while in-store bogofs have gone, online shopping created a “number of mechanisms” such as itemised bills with clearly marked expiry dates that weren’t available in-store.

But MPs didn’t feel this justified the distinction. “I don’t see the difference with buy one get one free of perishables online and in a supermarket,” said Labour MP Angela Smith. “I don’t accept the explanation.”