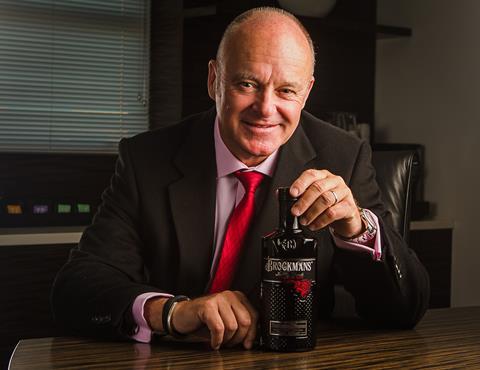 Paul Walsh has been appointed to Brockmans advisory board

Walsh was at the helm of the FTSE 100 drinks giant, which owns the Tanqueray and Gordon’s gin brands, for 13 years before stepping down in 2013. He has been appointed to Brockmans advisory board to help “shape strategy” for the next phase of the company’s development.

As part of a new five-year growth plan, the gin maker is aiming to expand its international footprint, particularly in the US.

“I have watched Brockmans’ progress with admiration over the past few years and I look forward to playing a part in the next exciting phase of its growth,” Walsh said.

Brockmans chief executive Neil Everitt, who co-founded the business in 2008, added: “I am delighted Paul has agreed to join us on the exciting next leg of our journey. His industry knowledge, experience and contacts will help us achieve our ambition of doubling sales and becoming the best super-premium gin business in the world.”

Brockmans, which is already sold in 45 countries, boosted revenues by 26% to £10.3m in 2018, driven by a 64% sales jump in the UK, which overtook Spain as the company’s biggest market. Expansion in the on-trade coupled with a host of new supermarket listings in Morrisons, Asda and the Co-op helped volumes increase 37% to almost 85,000 nine-litre cases.

“Paul’s success in developing a multinational business will be particularly relevant as we grow Brockmans’ international presence,” Everitt said.

“We still see huge potential in Europe but also in the US, where ultra-premium gin sales grew 25% in 2018. The US market is still in its infancy, several years behind established gin-drinking countries in Europe such as Spain and the UK. This represents a great opportunity that Paul will help us capitalise on.”