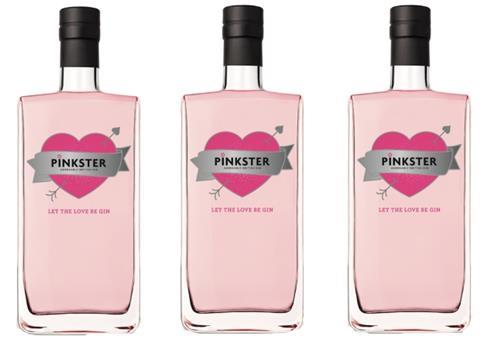 Pinkster has unveiled a limited-edition bottle for its premium gin ahead of Valentine’s Day.

The pack features a loveheart and the strapline ‘Let the love be gin’, and will be available from this week onwards (£35/70cl).

It would build on the growth of the special edition Valentine’s bottle the brand launched last year, which led to a 335% year-on-year sales boost over the four weeks to Valentine’s Day, said Pinkster marketing director Will Holt.

Only 5,000 bottles will be made, backed by price promotion with on-trade supplier Matthew Clark, trade press advertising and a minute-long ‘raspberry romance’ stop-motion animated video. The brand has also created themed Valentine’s Day cocktails, which will be promoted on social media.

A “healthy portion” of sales was expected to come from gifting, said Holt. With Diageo, the world’s largest spirits company, having added Gordon’s Pink gin last summer, “we reckon it’s fair to say that there’s real momentum in this burgeoning subcategory”.

Meanwhile, supermarket gin sales surged at Christmas, trouncing the likes of vodka, rum and prosecco in the battle for festive booze buys. Brits splashed out £36.4m on Mother’s Ruin in the final week to Christmas alone, accounting for an additional 636,000 bottles compared with the same week in 2016 [IRI Retail Advantage].