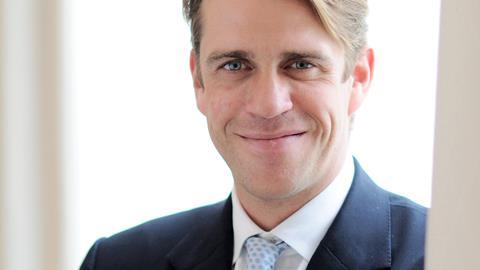 Quintessentially founder Ben Elliot might seem an unusual choice for the government’s first food waste champion, but the businessman says he’s passionate about putting waste back on the agenda

Three years reporting on food waste for The Grocer has taken me to many places. East London warehouses piled high with surplus, village hall kitchens where volunteers cook up leftovers at lunch clubs, innumerable office meeting rooms and even, once or twice, the Houses of Parliament.

But of all the places I’ve sat down to talk waste I think Bourdon House in Mayfair, where I’m meeting Ben Elliot - the UK’s first food waste champion - must be the most incongruous.

A few doors down from a Vivienne Westwood boutique and a purveyor of luxury yachts, the members’ club is all dark wood, wingback chairs and antique tomes. It suits perfectly, in other words, the immaculately dressed founder of a luxury concierge company who co-founded Quintessentially in 2000.

It’s a business that matches members with top restaurant tables, books dream vacations and helps curate art collections. How then did Elliot end up sitting across from me, talking about a topic undeniably less luxurious?

Potted CV: Running Quintessentially since 2000, and its philanthropic arm, which has raised £12m since 2008 for the Eranda Rothschild Foundation. Trustee since 2015

Career high: It was a very proud moment when I was asked to be made the government’s Food and Surplus Waste Champion

Career low: I’m sure it will happen soon!

Business ethos: Work hard and be nice to people - something my mother has always taught me

Business idol: The Prince of Wales and Lord Bamford

What are you watching? Currently Line of Duty - along with the rest of the population!

“I’m a long-term volunteer, driving a van on the west London route for [food redistribution charity] The Felix Project,” he says. “And I have a record in the philanthropic space of working with charities and not only getting them more funding, but more awareness and scaling their volunteer network.

“It became palpably clear to somebody who is as fortunate as me, who can have three square meals, that there are many people across our land who don’t have that luxury. There are terrible stories of people in abject poverty.”

That enthusiasm must have filtered back to Michael Gove because in December 2018 the environment minister appointed Elliot to the newly created volunteer role, which sees him tasked with driving the government’s plans to slash food waste. It’s a role that, in just a few months, has seen him meet up with NGOs, Defra, Wrap and industry. All in an effort to swot up and construct a workable plan that enables the UK to achieve its UN target of a 50% reduction in food surplus by 2030.

At an event at the V&A on Monday, Elliot and Defra will announce the first phase of that plan, which includes a ‘Food Conversation week of action’ in November, the next phase of funding for redistribution and a call on major industry players to sign up to a pledge that commits to “ambitious” food waste targets within their businesses. Elliot’s hope is it will create sufficient volume to get the issue back on the public agenda.

“I really believe that if in that [national Food Conversation] week the retailers, policy commentators, the press and schools come together we could for the first time talk about food waste in a slightly different way.

“Food waste has only really gone down at a societal level 11 years ago when we had a financial meltdown in this country and people felt it in their back pocket. The commitment we’ve made in another 11 years’ time to cut it by half and eradicate it completely by 2050 - well, we’re just simply not going to get there.

“The issue is that as a percentage of our household income, food is not very much. For other societies it’s much higher, partly because they venerate food more but predominantly because retailers and manufacturers in this brilliant, free market world in which we live have pushed prices so low that most consumers don’t think of it as a problem to throw food away.”

“As soon as you get into publishing data, and things are accountable, guess what? Behavioural change happens”

Government, NGOs and individuals all have a role to play in tackling that status quo, he believes. The major grocers arguably more than most. Perhaps it’s why “they’re the people that wanted to see me first”.

“They wanted to explain the challenges they’ve had, where they’ve come from and hopefully where they’re going. Some of them are very good, some need a bit of a kick up the backside. But it doesn’t really matter as long as they’re going in the right direction and stick to the road map that Wrap have set out.”

Those that don’t will find themselves left red-faced by league tables that Elliot plans to publish in November, setting out progress on redistribution and targets across retail, manufacturing and hospitality. “Some people have said ‘you’re creating a league of shame’. Well if they’re saying that, perhaps they’re creating something to be ashamed of. As soon as you get into publishing data, and things are transparent and accountable, guess what? Behavioural change happens. I’m very excited about that.”

He’s also excited about the potential of the £15m pilot fund - a “jolly good idea” - proposed by The Grocer and committed to by Gove last October, to boost redistribution. The first tranche of recipients was announced this week. Details of the next round will be announced on Monday. And he wants to champion “all the good stuff happening among individuals, companies, chefs, innovators - the more you champion those, the more things will change.” There are more ideas up his sleeve too, not all of which he wants The Grocer to share.

Suffice to say “you can tell I’m enthusiastic about trying to find solutions to some of these things and passionate that we need to do something about it”.

“What would be great is if we were sitting here in three years’ time and the industry has been more aggressive with its targets and we can account for them making a huge difference.

“Because I just don’t think we’re there yet. Eleven years is not that far away. We’re going to have to do some pretty dramatic things.”