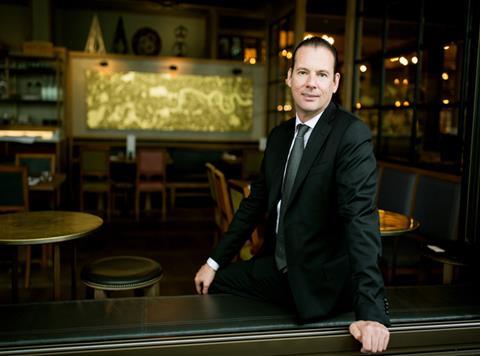 There is only one place to begin. How did Sean Ramsden, CEO of Ramsden International, the biggest exporter of British food and drink in the UK, and therefore a big beneficiary of the Brexit vote thanks to a weakened pound pushing down export costs, vote in the referendum?

Disappointingly, he’d “rather not say”. Why not?

“It was a very divisive campaign, the quality of debate was very poor and it was poor for the political culture of the country. So I made a deliberate decision to stay out of the debate. My perception now is there are clearly a lot of challenges for a lot of industries.”

To say the least. I say I voted to remain and think Brexit was a terrible decision that’s an ongoing catastrophe for the country, unless you’re an exporter, that is. So from a professional point of view I can understand the attraction of Brexit. Did he vote to leave?

“I’d rather not say,” he repeats. “I think export has probably received a boost from Brexit and weak sterling but sterling was probably overvalued before Brexit. It was already hard for us to get traction in markets. My hope is that Brexit will allow ourselves and other exporters to broaden their horizons beyond Europe and towards the rest of the world.”

Where are you going on your stag do? I’ve already been actually, I went to Las Vegas with 11 friends. I stayed at the Encore hotel

Did you win big? No, I don’t gamble at all, it’s not my thing

Where are you going on honeymoon? The Seychelles

What’s the last good film you saw? I watch a lot of films on planes and forget them. My favourite film I saw recently was an old one, Amadeus

What’s the best career advice you’ve been given? It’s all about the people you work with, the relationships you build internally and the ones you build externally with customers

What’s the worst business advice you’ve heard? I once heard of a company that had ‘ruthlessness’ as one of its corporate values.

What advice would you give any aspiring CEO? My biggest learning would be to assemble the right team together. If I look at what held our business back historically it wasn’t having the right people in place, but we do now

This outreach would have happened anyway. “A lot of research indicates future growth from a consumer level is far more likely to be in countries like India, China, Africa and Latin America rather than the EU,” says Ramsden. “Seven years ago our sales were split 50/50 between EU and non-EU markets. Since then our EU business has broadly remained stable but our non-EU business has grown significantly. So the growth we have had is all non-EU and now it’s closer to a 25/75 split. So my hope is Brexit has a positive effect. And hopefully the government will move forward and create new trade agreements where the EU had struggled in the past because it had to have the agreement of 27 countries to do it. That’s my optimistic take on the situation.”

He still won’t say how he voted, however. So if he had the power to reverse the situation and make Brexit disappear, would he do it?

“All I can say is I see a lot of opportunities as a result of Brexit. Clearly there are loads of challenges as well. And there are many different perspectives from that of Ramsden International. From my point of view I am fairly optimistic about the opportunities.

“Would I want those opportunities to go away? I’m not sure I would, actually. I’m keen to structure our plans around trying to capitalise on them. I think it’s massively complicated and it impacts every industry and sector and company and individual in a number of ways. But looking at it from the perspective of exporting food and drink, there are more opportunities now.”

Those opportunities were immediate thanks to the post-referendum plunge in the value of sterling, which is currently around 12% lower compared to the dollar and the euro than it was pre-referendum.

“Food is price-sensitive, so food exports are exchange rate-sensitive, and it’s certainly the case that demand has increased as a result of weak sterling. In the last financial year we hit £50m, which was certainly helped by Brexit, although there are plenty of other things we are doing in the business that helped the growth too. We’ve averaged 27% growth every year for 15 years. But without doubt the strength of sterling is a big factor.”

Once Brexit happens, though, there have been warnings of chaotic delays at ports once customs checks are reintroduced, which spells trouble for anyone involved in international trade. Are those fears justified?

“Nobody really knows. We are watching closely, we have our own team of people that focus on international logistics, but so much is unclear at the moment. But there are different ports, different ways to get product into countries, I am sure our international logistics team would be able to deal with it for the most part. And only 25% of our business is in the EU so there is less of an impact for us than others. My hope is that sense prevails.”

In terms of food and drink the EU exports “significantly more to the UK than the other way round. So it’s in everyone’s interest we don’t create blockages to change, whether logistical, fiscal or legislative.”

The EU might argue the UK just created the biggest logistical, fiscal and legislative blockage Europe has ever seen. Is asking them to be reasonable pushing it a bit? “It’s for the UK and the EU to try as best they can not to create barriers. There was a referendum and the people made a choice, we have to work with it together and make the outcome as positive as possible. My worry is the ‘Britain must be punished’ message coming from the EU, and my fear is a ‘cutting off nose to spite face’ thing going on, which would be a shame for the exporting countries in the EU more than those in the UK.”

The hardline stance adopted by the EU in negotiations to date doesn’t look promising for the UK, and time is ticking towards the existing deadline of March 2019, with a big sticking point the size of the financial settlement, which is currently hovering around €50bn. Does it strikes him as a realistic figure?

“It strikes me that it’s all part of the posturing that goes on in negotiations. The whole process of Brexit is so complicated that achieving it all by March 2019 strikes me as ambitious. I have sympathy with the argument for a transitional arrangement to give us more time to work out what the final arrangement looks like. It’s phenomenally complex and it’s obviously not just food, it’s every industry. ”

Is he becoming worried as the situation unfolds?

“It’s a concern. But I have a natural sense of optimism and perhaps that drives me to think sense will prevail, because whatever challenges are created there are even more challenges for EU exporters, so everyone has an interest to minimise them.”

Ironically, it was the combination of an earlier fall in sterling caused by Britain’s botched involvement in the ERM in 1992 and the start of the EU single market in 1993 that led to the creation of Ramsden International, a “specific division to handle export in a specific way” that spanoff from the Grimsby-based wholesale business founded by Ramsden’s grandfather in 1947.

It makes Ramsden more familiar with the complexities of European and international trade than most, but no one from government has been in touch for his thoughts on how to untangle itself from the EU. If they did he would be happy to help, although he offers no predictions about how it will pan out. “The world is changing at such a rate that predicting the future becomes harder and harder.”

He does have big plans for Ramsden International, however. “We have ambitions, we’d like to grow organically and we don’t have any specific targets but clearly M&A is one route we would look at.”

The business is already growing steadily. It distributes 23,000 British brands (confectionery and biscuits are its biggest sellers) to 133 countries, serving 600 customers who “vary enormously” from small independents to large supermarket chains, wholesalers, importers and distributors. “We tailor those conversations to the kind of business we are talking to, backed up by sensible use of data. A lot of what we do is to keep overseas customers in touch with UK trends.”

How big is the opportunity? Ramsden thinks sales will grow by 25% next year. Own label is one way he plans to do it. Starting small, with 36 products under the ‘Kingsbury’ brand (“very British sounding”), it gives Ramsden a “product that is export compliant already. By being able to control the formulation of the product, the ingredients, the packaging, the technical information and documentation, we will end up with a product we can get into the market much easier.”

The variation of regulatory compliance in different countries is one of his biggest challenges. “We do a lot of reprocessing of products where we have to print translated ingredients, or usage labels, which we stick over every product. For instance, a couple of years ago the South Africans insisted on a gap between 330 and the ml on a can of drink that was a fraction bit wider than the standard UK gap.”

Such pedantry could be an attempt to hinder imports without slapping on tariffs. “Of course I can’t be sure that’s the thinking behind these things, but a lot of our time and effort as a business is understanding and complying with them. They are much more widespread than a lot of people are aware of. There is a basis of consumer protection to all of them but in some cases it may be over-egged. And it’s not just to hinder imports, it might be to justify a larger bureaucracy, or in some markets, which lack transparency or are corrupt, to facilitate bribes.”

Technically it’s “impossible to comply so you get the product in by bribing. We never do that but we know it happens, we have our suspicions and we hear rumours. But integrity is one of our core values and there have certainly been occasions where we have lost business as a result of protecting that.”

The prospect of more irksome non-tariff barriers courtesy of Brexit is worse than any “five, six, or seven per cent” import duty. “That’s not the issue, the issue is some of these technical barriers are so onerous they almost prevent it from happening. Not enough focus is placed on that. People talk about new import duties between Britain and the EU but the question is what non-tariff barriers are going to come about?”

It’s one of many hard questions that need addressing in the run up to March 2019. And Ramsden is one of many waiting for the answers.