British food standards are at risk

The contrast between American and British food really hit me in a supermarket in Barbados. Half the stock was imported from the US, the other half from the UK, via a deal with Waitrose. The US stuff was stiff with additives and techno-ingredients only a chemistry professor would understand. Relatively speaking, the British products were an oasis of transparency and simplicity; short and sweet ingredient labels, much more akin to homemade food. Why? Because of all the battles European citizens have fought and won for a more natural, humane, ethical, environmentally aware food system. 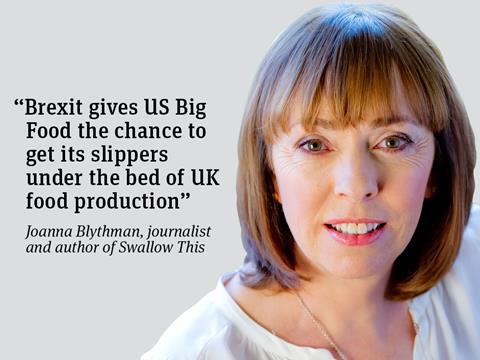 If you care about what you eat, food shopping in the US must be a challenge, enough to make you consider living off-grid and growing your own. My Barbados experience really brought home to me how glad I was to be eating British food. It never occurred to me that the higher food standards we’ve achieved as an EU member state might be swept away before we had time to blink.

But like a sneaky goal that no-one saw coming, Brexit gives US Big Food the chance to get its slippers under the bed of UK food production. When we’re no longer subject to EU law, the rules that currently protect the health of humans, animals, and the environment can be dismantled to accommodate race-to-the-bottom trade deals with the US and cheap labour countries like China, that can undercut on price and dwarf in volume anything this country produces.

An exaggeration? It isn’t. Were you aware, for instance, that the principle, enshrined in EU law since 1996, that farm animals are sentient creatures that can feel pain is completely absent from the government’s Repeal Bill, which will move European law into UK law once we leave the EU? As Compassion in World Farming puts it: “This could be a disaster for animal welfare.” Alarm at this and many major omissions and worrying legal loopholes in the Repeal Bill, such as the loss of the ‘polluter pays’ and precautionary principles, is spreading. Our current government seems intent on sweeping aside food rules without proper parliamentary scrutiny. A new Repeal Bill alliance has sprung to life to fight it. Welcome to food wars, Round Two.