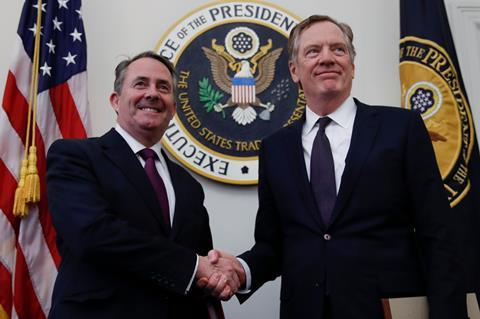 Chlorinated chicken looks to be firmly off the menu in a post-Brexit UK after Liam Fox this week insisted he would rebuff US attempts to undermine British food production standards in any US-UK trade deal.

Speaking exclusively to The Grocer after a week of heated debate - in which the international trade secretary was accused of indiscriminately wanting to allow in US fare - Fox said: “This government cannot be clearer, we will not compromise the UK’s high standards in any future trade agreement.

“These high standards underpin the success of our industry at home and abroad and will be essential for the success of any future trade agreements - which will open up new markets for Britain’s world-class farmers and food manufacturers.”

He added: “When it comes to products imported into the UK, quality and safety is paramount. Without exception, imports must meet all relevant UK food safety rules and regulations.

“After we leave the EU, our current high standards in all areas will continue to apply, including on import requirements. Any existing EU regulation concerning food safety that is not already in domestic legislation will be converted into UK law via the EU Withdrawal Act.”

Fox’s statement was welcomed by British Poultry Council CEO Richard Griffiths: “This is good news and a step forward in the right direction, and is warmly welcomed by the meat industry.

“It is a welcome recognition of our unscrupulous high standards, and allays our fears the food and farming industry was in danger of being sacrificed to secure trade deals after Brexit, and sets out that our high standards- especially on animal welfare – will not be swept aside.

“The minister’s words shows the government has been listening to our fears that cheap imports would not only risk the UK’s leading welfare regulations, but further impact our businesses, which are already suffering from Brexit uncertainty.”

Griffiths added: “We can now focus on the areas of Brexit to try and ensure a smooth as possible exit from the EU.”

Fox’s clarification comes after a week in which British producers expressed growing alarm about the prospect of cheap imports undercutting domestic producers post-Brexit, as US ambassador Woody Johnson insisted any UK-US trade deal would have to include food and farming products.

National Beef Association CEO Chris Mallon warned: “I believe we may be sold down the river, and that beef producers and our animal welfare may be easily sacrificed.”

And former farming minister George Eustice wrote in an angry op ed in The Guardian: ‘Liam Fox understandably wants to talk about opportunities for new industries such as services or digital but, in the court of public opinion, if the choice is between the commercial interests of banks or the welfare of chickens, the chickens will win every time.’