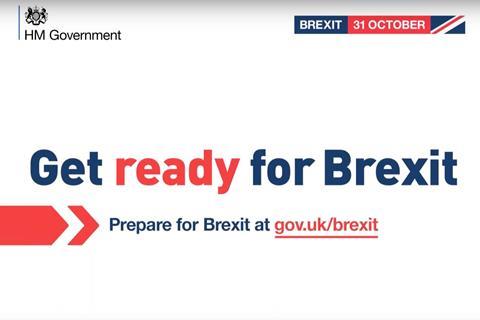 The report suggests the Get Ready for Brexit campaign, which launched in September, has had a “limited impact”

The government’s £140m campaign to prepare businesses for a no-deal Brexit has failed, according to a report by the National Audit Office, which warns hundreds of thousands of companies are not ready.

The report suggests the Get Ready for Brexit campaign, launched in September, has had a “limited impact” and warns that huge numbers of companies have failed to get the documentation they require.

HMRC estimates 150,000 to 250,000 businesses may need to make a customs declaration on the first day after Brexit, but the report found only 25,000 had registered so far.

The report also warns that with only 5% to 20% of small and medium-sized enterprises ready for French customs checks, there are significant risks of major delays at the border, which food and drink leaders have warned would lead to food shortages and increased prices.

The NAO said food bodies and hauliers had warned that the government’s preparedness campaign was too little and too late to prepare businesses for such a logistics challenge.

Are you ready for a no-deal? Food & drink’s biggest Brexit questions answered

“Despite recent efforts across government, a large proportion of traders and businesses would not be ready for new customs and regulatory controls if the UK leaves without a deal, and might not be able to access the support they require,” the report says.

“The flow of goods across the border depends on businesses knowing and complying with their border obligations. Groups representing traders, hauliers and ports told us that they welcomed the government’s efforts to provide information to help them prepare but some were concerned about the scale and complexity of the task their members faced.”

It goes on to say that despite the government’s move in August to begin automatically enrolling more than 88,000 VAT-registered businesses for so-called Economic Operators Registration and Identification (EORI), up to 70% of businesses had not registered.

The report adds: “On 1 September the government launched a major communications campaign to help individuals and businesses prepare for EU exit, including newspaper and television adverts, improved guidance, and direct engagement with industry.

“However, at this late stage and with ongoing uncertainty about the prospect of no deal on 31 October, this may have limited impact.”

Other problems include the need for a “very significant” increase in the number of customs agents to help the flow of goods across the border, with the 4,000 currently in place not enough to cope with a no-deal scenario, the report says.

“Despite the government’s actions, it has been unable to mitigate the most significant risks to the effective functioning of the UK border in the event of no deal and the border would be less than optimal. This could include delays for goods crossing the border, increased opportunities for tax and regulatory non-compliance and less information to inform checks of people crossing the border,” the report concludes.

BRC director of food & sustainability Andrew Opie said: “The report from the National Audit Office on UK border preparedness once again highlights the risks of leaving the EU without a deal on 31 October.

“The government’s own figures suggest the flow of goods across the Channel straits could be reduced to 45% to 65%, which would result in higher prices and reduced availability of goods, particularly fresh fruit and vegetables. Also concerning is the suggestion that some of the temporary mitigations at the border may increase the risk of non-compliance or criminal activity. The NAO report is yet another piece of evidence that underscores the need for a deal that ensures frictionless tariff-free trade between the UK and EU.”

A government spokeswoman said: “We are doing all that is necessary to ensure that, if we do leave without a deal, the transition will be as smooth as possible for people and businesses – which the NAO recognises. This includes simplifying import processes, upgrading IT systems, securing additional freight capacity and putting traffic management plans in place around our busiest ports.

“As the NAO says, many of the challenges that we may face if the UK leaves the EU without a deal require businesses and citizens to take action. That’s why we are running the largest communications campaign in recent UK history and providing targeted advice to help them get ready for Brexit on 31 October.”