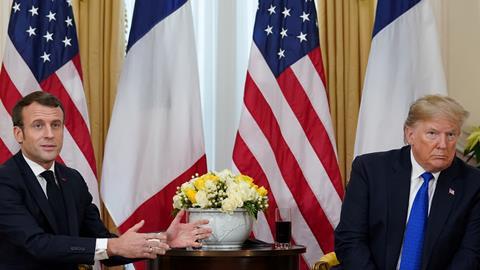 From New Zealand lamb to Pakistani rice, Canadian prawns to Peruvian avocados, British consumers are long accustomed to an abundance of global foods.

But next week, the trade systems that provide our gastronomic bounty may become extremely shaky.

The World Trade Organization’s (WTO) appellate body - the referee of international trade - will be paralysed following Donald Trump’s refusal to appoint new members to its board.

Experts believe it is the first clear sign of departure from a trade system governed by common rules, marking a shift towards a power-based system that could ultimately lead to a breakdown in global trade deals and international co-operation.

With almost half of our food now imported from abroad, could Britain’s global food supply soon be in peril?

Donald Trump is not the first leader to be infuriated with the WTO. Frustration with the Geneva-based trade regulator has spread in recent years with G20 leaders calling for “necessary reforms” as recently as January.

However, Trump’s ire that the US is unfairly penalised is undoubtedly the most serious threat the WTO has yet faced. “We lose the lawsuits, almost all of the lawsuits in the WTO,” he said in 2017.

This was later shown to be false - the US loses no more frequently than other countries - but Trump was not driven by the claim’s veracity. He wants to transform the rules governing global trade and is not alone on the global stage in supporting a protectionist agenda.

The WTO’s appellate body is the “supreme court” of trade disputes. The White House’s refusal to appoint new members to the body means it will lack the minimum number needed to function, and faces closure.

It will be a devastating blow to the WTO’s essential role of upholding the integrity of international trade at a time when policies such as “America First” increasingly place multilateral relationships under assault. For many, it fires a starting gun on the disintegration of a rules-based system to global trade.

“It’s the first real break with the existing system. It’s a sign of decline,” says Holger Hestermeyer, a reader in international dispute resolution at King’s College London. “Whenever Britain expects other countries to abide by the rules, expect weaker enforcement by the WTO.”

It is unclear exactly what will happen to the WTO’s dispute process, with negotiators still trying to maintain hearings for a handful of pending cases.

Simon Lester, associate director at the Cato Institute, is confident it will find a way to continue. “There is a risk the whole thing falls apart, but I think more likely we’ll see the value in it and continue it in some form.

“The more likely situation is the WTO doesn’t stop functioning, the WTO disputes settlement finds a way through and perhaps the appellate body can be revived.”

But Trump’s attacks are unlikely to end with the appellate body. The WTO is currently due to close entirely on 1 January if the White House carries through on threats to block its budget, an outcome director general Roberto Azevêdo believes could “threaten political stability”.

“Nations need a way of co-operating on trade issues and holding each other to agreed standards. And they need a forum in which to do so. That is what the WTO provides,” Azevêdo said in April.

In a world without trade rules, he warned, countries could raise tariffs without restraint. Threats like those currently coming from Trump, to put massive taxes on French goods in retaliation for France’s planned digital services tax, could become more common, costing businesses certainty and affecting investment, while igniting the possible return of “outdated practices such as quotas and export subsidies”.

“You will see countries going back to old habits and doing what they want,” agrees Hestermeyer.

For the UK, a deterioration of the rules-based system is particularly concerning as it moves towards its likely EU departure. The transition to a system in which power lies with the largest economies would arrive just as the UK exits one of the world’s largest global powers.

It is becoming a medium power just as the rules-based system designed to support medium powers is dissolving, believes David Henig, a former British trade negotiator.

“If you no longer have to treat countries equally then that could be a problem for us.

“The EU can stand up to most challenges, but the UK won’t have as many trade agreements in place. [A loss of the WTO] matters less if you have bilateral agreements,” he says.

The closure of the WTO’s appellate body would be unlikely to affect British food systems immediately, he adds. But the medium-to-long term effects could be significant.

“Without agreed rules and effective institutions … trade disputes and protectionism will increase,” said the Ministry of Defence in its Global Strategic Trends report last year, providing a 30-year outlook on defence and security.

“Government will need to understand their role in a changing world … failure to adapt risks a polarised, less-stable world with a higher likelihood of conflict,” it said.

“Trade disputes and protectionism will increase without rules”

“In a world where Trump can suddenly slap 100% tariffs on French cheese … what’s going to happen to a producer who’s geared up for export? They’ll be producing more than they could ever sell on their local market,” he says.

“If I as a small producer think I might lose access, then the uncertainty means I might say it’s not actually worth the cost,” she says.

“It deters entry into markets and deterring entry deters competition. If you remove competition then the average prices will go up.

“The rules-based system is falling apart and it will be very hard to rebuild it.”

However, Benton emphasises the future is not necessarily gloomy, but may present an opportunity to redesign the food system and move towards more sustainable and resilient production.

Why is Australia demanding compensation from the UK over Brexit?

“The future will be about being able to do new things in new ways,” he says. “We could substitute with more production from the UK … a reconfiguring of the food system where the diversification of local farmers meets local supply needs.”

A reorganisation of our domestic food system will require farmers to be fleet of foot - often a luxury of the very large or the very small, those that hold significant capital and investment opportunities, or those sufficiently small and nimble to adapt.

“There will be a hell of a lot of farmers stuck in the middle trying to do what they’ve always done throughout their lifetimes who will find it a really difficult environment,” says Benton.

As ever, the future is unclear. But if power is to become king again as we move towards an independent future outside the EU, a rethink of our most fundamental trade principles is undoubtedly required.