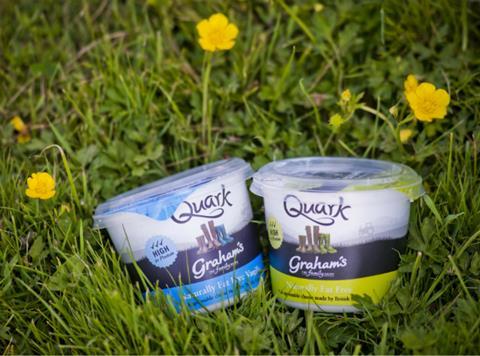 Scotland-based Graham’s the Family Dairy has launched a new quark soft cheese range and picked up UK-wide listings for the product across the mults.

The range of high-protein and low-fat cheese began rolling out this week in original and vanilla-flavoured variants (rsp: £1.25/250g), and was smoother in texture than Continental-style quark, Graham’s said.

Either one or both variants are available nationally in Tesco, Sainsbury’s, Morrisons, Ocado and Aldi, in addition to Asda and Lidl stores North of the Border.

The launch follows a pledge by the processor to extend its existing range last year into quark, cottage cheese and soured cream as part of a bid to expand outside its Scottish heartland.

“The majority of quark on offer in the UK is imported from Germany and we firmly believe ours is a superior, smoother and hugely versatile and fantastic-tasting product,” said MD Robert Graham.

“NPD is crucial for our business and we’re delighted to be entering this market at what is an exciting time of growth for quark,” he added. “We have a large number of great listings across the UK and plan to expand our reach further in the coming months.”

The company’s ambassadors, celebrity chef Nick Nairn and Great British Bake Off semi-finalist Flora Shedden, have created a number of quark recipes available on the Graham’s website to support the launch.