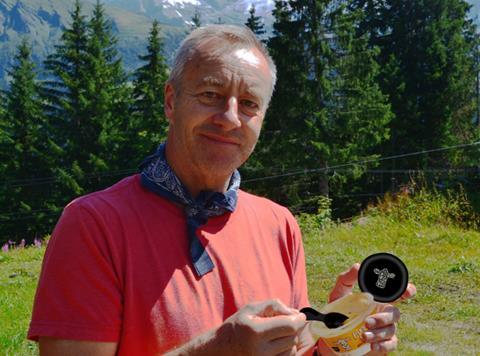 The Collective Dairy is launching a limited edition yoghurt in memory of co-founder Mike Hodgson, who died aged 57 last August from a sudden cardiac arrest while cycling.

The limited edition is inspired by Hodgson’s love of plums and consists of The Collective’s yoghurt with a double layer of British Victoria plum conserve, infused with Mexican orange blossom honey and crystallised stem ginger.

Five pence from each pot sold will be donated to charity the Community Heartbeat Trust. The Collective is aiming to raise a minimum of £15,000 as part of a national campaign to bring at least 10 retired red telephone boxes back to life by fitting them with life-saving defibrillators.

The brand and Hodgson’s family is also hosting a 350-mile, five-day charity bike ride with 20,000 ft of climbing from 2 to 6 September, dubbed Bike for Mike. All proceeds from the ride will go to the Trust. Those wishing to donate can do so by visiting justgiving.com/fundraising/bike-for-mike.

“Mike was a man of great vision and an inspiration to us all,” said The Collective co-founder Amelia Harvey.

“He had an enormous sense of fun, loved the outdoors and big adventures and was adored by family, friends and work colleagues,” she added.

“Through this limited edition launch we have the opportunity to tell Mike’s story and help people throughout the country. It includes British plum: one of Mike’s favourite fruits, so it is in honour of him, and we hope he would have been proud. We will raise funds through sales of this product and donations supporting the bike ride that will commence at Mike’s family home in Keswick and end at our headquarters in London.”