Greggs to roll out drive-throughs nationwide after successful trial 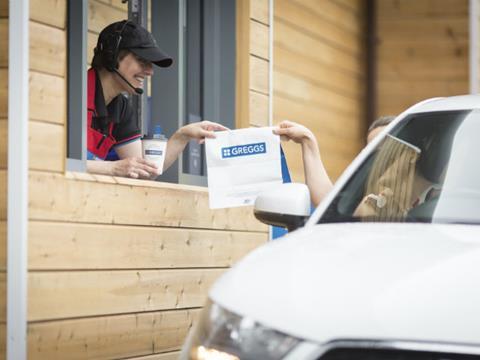 Greggs is accelerating plans to open more drive-through sites after an ‘encouraging’ trial in Manchester.

CEO Roger Whiteside said after the food-to-go chain released its first-half results that the popularity of its first drive-through shop – opened in June – indicated a demand for further locations across the UK.

“We’re actively looking for more drive-through sites now that we have trialled a way to operate them,” he added.

Whiteside confirmed that his ambitions to grow the Greggs portfolio to more than 2,000 stores included “as many drive-throughs as we can get hold of that will stack up financially for us”.

He also hinted at the possibility of a future trial of home delivery or click and collect service as the group sought to tap growing consumer demand for convenience and said Greggs was piloting an office delivery service in London, Newcastle and Manchester.

The business continued to benefit from its revamped range of healthy sandwiches and yoghurt and granola pots, as well coffee and other breakfast items. It also opened 61 new shops in the half – with 19 closures – boosting the estate to 1,806 sites.

However, rising costs and inflation squeezed margins during the period, with operating profits up just 1.8% to £27.6m.

Pre-tax profits also fell 23.6% to £19.4m after being hit by exceptional costs of £8.7m related to the restructuring of its bakeries across the UK.

Whiteside warned that cost pressures would remain for the rest of the financial year.

“We were signalling that at the beginning of this year we would see a spike in inflation, it’s come through at about 7% for ingredient inflation in the first half, and we see it moderating slightly in the second half,” he said. “It’s going to be slightly less in the next quarter, but not that much less.”

Rising prices for dairy, pork, tuna and beef used for its range of savoury and sweet pasties and pastries hit the group the hardest.

“We’ve got large scale investment programmes going on, all of which are taking the costs out of the business,” Whiteside added. “We’re using that to mitigate as much as possible the inflation pressures we’re facing.”

Greggs is investing £100m over the next five years in its supply chain to restructure the group, including closing a number of its bakeries across UK and centralising its manufacturing operations at fewer regional hubs.